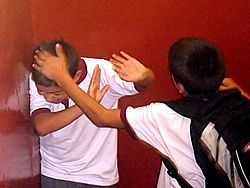 Bullying is when someone shows rude or mean behavior to another person. The people who do bullying are called bullies. Bullying is directed repeatedly towards specific and general targets or subjects. Bullying can be defined in many different ways depending on its context. Bullying doesn't have to be physical. It can be things that people say.

The subject of bullying includes picking on people that people see what happens but they don't do anything about it. When witnesses know what to do and they do it, the action becomes part of a process which makes a bad situation better.

Bullying is not only violence against the bullied person. It's also bullying when other people hide it from those in power (teachers, bosses), other people who see it ignore it, or when the bully is helped to get away with it. Bullying can also be saying mean words said to people face to face.

School teachers and staff have tried to learn ways to stop bullying even when they do not see it themselves. They have learned that bullying can be easy to hide.

Some US states have laws against it.

Bullying can happen at school, work, at home, on the internet (cyber-bullying) or somewhere else.

A purpose is part of what makes bullying what it is. The process of bullying develops in many ways, including

Bullying may be a combination of one or more of these tactics (techniques). For example, Lance Armstrong explained "Yes, I was a bully. I was a bully in the sense that I tried to control the narrative and if I didn't like what someone said I turned on them." In other words, when someone said something Armstrong didn't like, "We ran over her, we bullied her."

Bullying behavior includes the misuse (harm) of power or position and making comments or threats about job security. The person that is getting bullied then feels insecure (not sure) about themselves.

Bullying also includes moving the goalposts by setting objectives which subtly change and cannot be defined or explained in ways that can be reached.

Bullying happens for a reason. The person is either not getting the attention they want or they are going through a family struggle and want to control someone else. Another possible reason, is that the person does not feel confident about themselves so they bully others to make themselves feel more powerful. Therefore, when the person that is the bully wants to get attention and show who's the best. They will start by saying mean things to students at school, that could possibly result in violence.

All content from Kiddle encyclopedia articles (including the article images and facts) can be freely used under Attribution-ShareAlike license, unless stated otherwise. Cite this article:
Bullying Facts for Kids. Kiddle Encyclopedia.