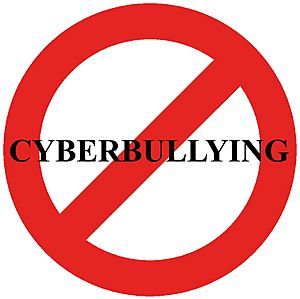 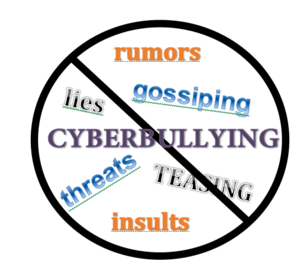 Bullying or harassment can be identified by repeated behavior and an intent to harm. Victims may have lower self-esteem and a variety of emotional responses, retaliating, being scared, frustrated, angry, and depressed. Individuals have reported that cyber-bullying can be more harmful than traditional bullying.

Awareness in the United States has risen in the 2010s, due in part to high-profile cases. Several states in the US and in other countries have laws specific to regulating cyberbullying. These laws can be designed to specifically target teen cyberbullying, while others use laws extending from the scope of physical harassment. In cases of adult cyberharassment, these reports are usually filed beginning with local police. Research has demonstrated a number of serious consequences of cyberbullying victimization.

Internet trolling is a common form of bullying over the Internet in an online community (such as in online gaming or social media) in order to elicit a reaction, disruption, or for their own personal amusement. Cyberstalking is another form of bullying or harassment that uses electronic communications to stalk a victim may pose a credible threat to the safety of the victim. In addition, not all negative interaction online or on social media can be attributed to cyberbullying. Research suggests that there are also interactions online that result in peer pressure, which can have a negative, positive, or neutral impact on those involved. 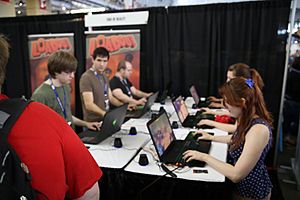 Online harassment in gaming culture can occur in online gaming

A frequently used definition of cyberbullying is "an aggressive, intentional act or behavior that is carried out by a group or an individual, using electronic forms of contact, repeatedly and over time against a victim who cannot easily defend him or herself." There are many variations of the definition, such as the National Crime Prevention Council's more specific definition: "the process of using the Internet, cell phones or other devices to send or post text or images intended to hurt or embarrass another person."

Cyberbullying is often similar to traditional bullying, with some notable distinctions. Victims of cyberbullying may not know the identity of their bully, or why the bully is targeting them. The harassment can have wide-reaching effects on the victim, as the content used to harass the victim can be spread and shared easily among many people and often remains accessible for a long time after the initial incident.

Cyberstalking is a form of online harassment in which the perpetrator uses electronic communications to stalk a victim. Cyberstalking is considered more dangerous than other forms of cyberbullying because it generally involves a credible threat to the safety of the victim. Cyberstalkers may send repeated messages intended to threaten or harass their victim. They may encourage others to do the same, either explicitly or by impersonating their victim and asking others to contact them.

Internet trolls intentionally try to provoke or offend others in order to elicit a reaction. Trolls and cyberbullies do not always have the same goals: while some trolls engage in cyberbullying, others may be engaged in comparatively harmless mischief. A troll may be disrupt either for their own amusement or because they are genuinely a combative person. 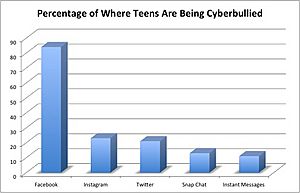 Where Cyberbullying Is Occurring

Manuals to educate the public, teachers and parents summarize, "Cyberbullying is being cruel to others by sending or posting harmful material using a cell phone or the internet." Research, legislation and education in the field are ongoing. Research has identified basic definitions and guidelines to help recognize and cope with what is regarded as abuse of electronic communications.

Cyberbullying can be as simple as continuing to send emails or text messages harassing someone who has said they want no further contact with the sender. It may also include public actions such as repeated threats, labels (i.e., hate speech) or defamatory false accusations, ganging up on a victim by making the person the subject of ridicule in online forums, hacking into or vandalizing sites about a person, and posting false statements as fact aimed a discrediting or humiliating a targeted person.

Cyberbullying could be limited to posting rumors about a person on the internet with the intention of bringing about hatred in others' minds or convincing others to dislike or participate in online denigration of a target. It may go to the extent of personally identifying victims of crime and publishing materials severely defaming or humiliating them.

Cyberbullies may disclose victims' personal data (e.g. real name, home address, or workplace/schools) at websites or forums or may use impersonation, creating fake accounts, comments or sites posing as their target for the purpose of publishing material in their name that defames, discredits or ridicules them. This can leave the cyberbully anonymous which can make it difficult for the offender to be caught or punished for their behavior, although not all cyberbullies maintain their anonymity. Text or instant messages and emails between friends can also constitute cyberbullying if what is said or displayed is hurtful to the participants.

Cyberbullying by email from a fictional friend@hotmail.com

The recent use of mobile applications and rise of smartphones have yielded to a more accessible form of cyber-bullying. It is expected that cyber-bullying via these platforms will be associated with bullying via mobile phones to a greater extent than exclusively through other more stationary internet platforms.

In addition, the combination of cameras and Internet access and the instant availability of these modern smartphone technologies yield themselves to specific types of cyber-bullying not found in other platforms. It is likely that those cyber-bullied via mobile devices will experience a wider range of cyber-bullying types than those exclusively bullied elsewhere.

A majority of states have laws that explicitly include electronic forms of communication within stalking or harassment laws. Most law enforcement agencies have cyber-crime units and often Internet stalking is treated with more seriousness than reports of physical stalking. Help and resources can be searched by state or area.

All content from Kiddle encyclopedia articles (including the article images and facts) can be freely used under Attribution-ShareAlike license, unless stated otherwise. Cite this article:
Cyberbullying Facts for Kids. Kiddle Encyclopedia.