K-pop (abbreviation of Korean pop) is characterized by a wide variety of audiovisual elements. While the modern form of K-pop can be traced back as early as to early 90s, the term has been popularized since 2000s and replaced the term Gayo which also refers to domestic pop music in South Korea.

Although it generally classifies "popular music" within South Korea, the term is often used in a narrower sense to describe a modern form of South Korean pop that is influenced by styles and genres from around the world, such as experimental, jazz, gospel, hip hop, R&B, reggae, electronic dance, folk, country, and classical on top of its uniquely traditional Korean music roots.

The more modern form of the genre emerged with one of the earliest K-pop groups, Seo Taiji and Boys, forming in 1992. Their experimentation with different styles and genres of music and integration of foreign musical elements helped reshape and modernize South Korea's contemporary music scene.

Modern K-pop "idol" culture began with the boy band H.O.T. in 1996, as K-pop grew into a subculture that amassed enormous fandoms of teenagers and young adults. After a slump in early K-pop, from 2003 TVXQ and BoA started a new generation of K-pop idols that broke the music genre into the neighboring Japanese market and continue to popularize K-pop internationally today.

With the online social networking services and Korean TV shows, the current global spread of K-pop and Korean entertainment, known as the Korean Wave, is seen not only in East and Southeast Asia but also Latin America, India, North Africa, the Middle East and the Western world, gaining a widespread global audience. 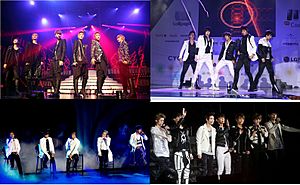 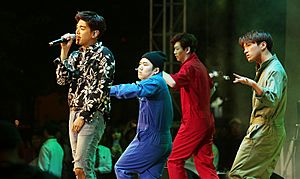 Management agencies in South Korea offer binding contracts to potential artists, sometimes at a young age. Trainees live together in a regulated environment and spend many hours a day learning music, dance, foreign languages and other skills in preparation for their debut. This "robotic" system of training is often criticized by Western media outlets. In 2012, The Wall Street Journal reported that the cost of training one Korean idol under S.M. Entertainment averaged US$3 million.

K-pop is a cultural product that features “values, identity and meanings that go beyond their strictly commercial value.” It is characterized by a mixture of Western sounds with an Asian aspect of performance. For some, the transnational values of K-pop are responsible for its success. Some examples of the transnational values inherent in K-pop that may appeal to those from different ethnic, national, and religious backgrounds include a dedication to high-quality output and presentation of idols, as well as their work ethic and polite social demeanour, made possible by the training period. 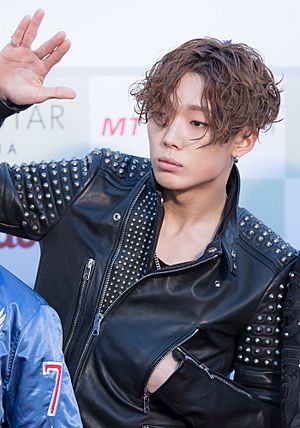 Many agencies have presented new idol groups to an audience through a "debut showcase", which consists of online marketing and television broadcast promotions as opposed to radio. Groups are given a name and a "concept", along with a marketing hook. These concepts are the type of visual and musical theme that idol groups utilize during their debut or comeback. Concepts can change between debuts and fans often distinguish between boy group concepts and girl group concepts.

Concepts can also be divided between general concepts and theme concepts, such as cute or fantasy. New idol groups will often debut with a concept well known to the market to secure a successful first debut. Sometimes sub-units or sub-groups are formed among existing members. An example subgroup is Super Junior-K.R.Y. which consists of members Kyuhyun, Ryeowook, and Yesung, and Super Junior-M, which became one of the best-selling K-pop subgroups in China. 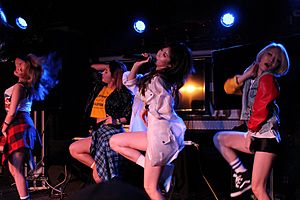 Dance is an integral part of K-pop. When combining multiple singers, the singers often switch their positions while singing and dancing by making prompt movements in synchronous, a strategy called "formation changing". The K-pop choreography often includes the so-called "point dance", referring to a dance made up of hooking and repetitive movements within the choreography that matches the characteristics of the lyrics of the song.

Super Junior's "Sorry Sorry" and Brown Eyed Girls' "Abracadabra" are examples of songs with notable "point" choreography. To choreograph a dance for a song requires the writers to take the tempo into account. According to Ellen Kim, a Los Angeles dancer and choreographer, a fan's ability to do the same steps must also be considered: Consequently, K-pop choreographers have to simplify movements.

The training and preparation necessary for Kpop idols to succeed in the industry and dance successfully is intense. Training centers like Seoul's Def Dance Skool develop the dance skills of youth in order to give them a shot at becoming an idol . Physical training is one of the largest focuses at the school, as much of a student's schedule is based around dance and exercise . The entertainment labels are highly selective, so few make it to fame. Students at the school must dedicate their lives to the mastery of dance in order to prepare for the vigorous routines performed by Kpop groups. This of course means that the training must continue if they are signed. Companies house much larger training centers for those who are chosen. 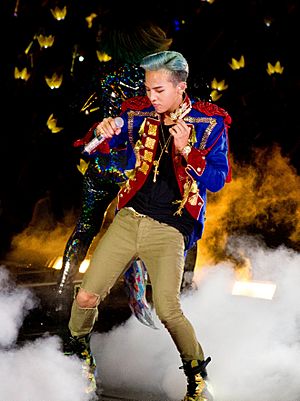 K-pop has a significant influence on fashion in Asia, where trends started by idols are followed by young audiences. Some idols have established status as fashion icons, such as G-Dragon and CL, who has repeatedly worked with fashion designer Jeremy Scott, being labeled his "muse."

There is some concern over trends such as skin whitening being popularised by the industry, which has been criticised for its narrow beauty standards.

The emergence of Seo Taiji & Boys in 1992 paved the way for the development of contemporary K-pop groups that fans interact with today. Seo Taiji & Boys revolutionized the Korean music scene by incorporating rap and American hip-hop conventions into their music. This adoption of Western style spread into the fashions worn by the boy band, and the boys adopted the hip-hop aesthetic.

As K-pop "was born of post-Seo trends," many acts that followed Seo Taiji & Boys adopted the same fashion style. Deux and DJ DOC can also be seen wearing on-trend hip-hop fashions such as sagging baggy pants, sportswear, and bandanas in their performances. With Korean popular music transforming into youth-dominated media, manufactured teenage idol groups began debuting in the mid and late '90s, wearing coordinated costumes that reflected the popular fashion trends among youth at the time. 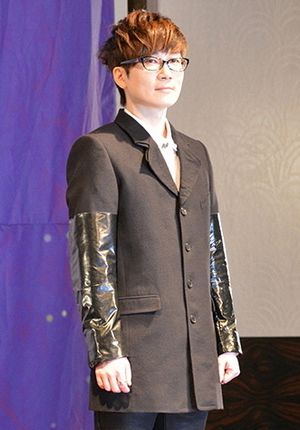 Hip-hop fashion, considered the most popular style in the late '90s, remained, with idol groups H.O.T. and Sechs Kies wearing the style for their debut songs. The use of accessories elevated the idol's style from everyday fashion to performance costume, as ski goggles (worn either around the head or neck), headphones worn around the neck, and oversized gloves worn to accentuate choreography moves were widely used.

H.O.T.'s 1996 hit "Candy" exemplifies the level of coordination taken into account for idol's costumes, as each member wore a designated color and accessorized with face paint, fuzzy oversized mittens, visors, bucket hats, and earmuffs, and used stuffed animals, backpacks, and messenger bags as props. While male idol groups' costumes were constructed with similar color schemes, fabrics, and styles, the outfits worn by each member still maintained individuality. On the other hand, female idol groups of the '90s wore homogeneous costumes, often styled identically. The costumes for female idols during their early promotions often focused on portraying an innocent, youthful image. 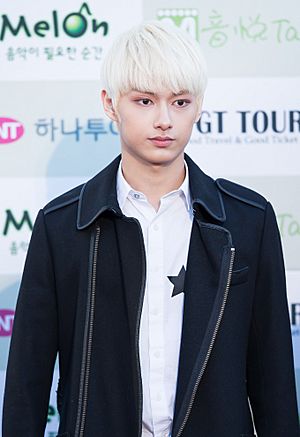 K-pop showed significant trends over the past few decades. The rise of ulzzang style parallels the K-pop phenomenon, hence many K-pop idols adopted the look, which is described as “huge, delicate bambi-like eyes with double lids and a tiny, delicate nose with a high bridge are a prerequisite. Smooth, pale snow-white skin, and rosebud lips are also desirable. So is a small and sharp chin to achieve the perfect “V-line” face, which should ideally be no bigger than the size of your palm".

This look was nearly impossible to gain naturally, giving rise to the popularity of circle contact lenses, plastic surgeries, and skin-whitening products. As K-pop became a modern hybrid of Western and Asian cultures starting from the late 2000s, fashion trends within K-pop reflects diversity and distinction as well. Fashion trends from the late 2000s to early 2010s can largely be categorized under the following: 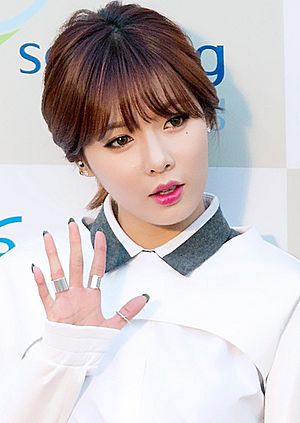 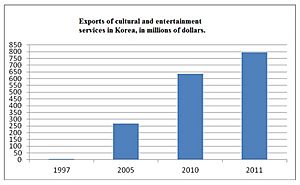 The South Korean government has acknowledged benefits to the country's export sector as a result of the Korean Wave. Government initiatives to expand the popularity of K-pop are mostly undertaken by the Ministry of Culture, Sports and Tourism, which is responsible for the worldwide establishment of Korean Cultural Centers. South Korean embassies and consulates have also organized K-pop concerts outside the country, and the Ministry of Foreign Affairs regularly invites overseas K-pop fans to attend the annual K-Pop World Festival in South Korea.

In addition to the use of the popularity of K-pop for benefits to the country’s export sector in economic perspective, the South Korean government has been taking advantage of the influence of K-pop in diplomacy. A representative example of the South Korean government effort in diplomacy exploiting K-pop as a tool can be Mnet Asian Music Awards (MAMA). MAMA, started with the opening statement of Park Geun-hye (the Korean president at the time), was K-pop music awards hosted by Mnet in Hong Kong in 2014. This event is considered to have power for South Korea to strengthen nation’s reputation and political influence towards the world. 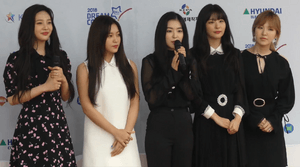 Another relatively recent instance can be K-pop singers’ performances in North Korea. There were a few precedents, terminated in 2005, that Korean pop singers visited North Korea to perform before North Korean audiences. After about a decade, approximately 190 of South Korean performers including well-known South Korean musicians, Red Velvet (band), Lee Sun-hee (singer), Cho Yong-pil, and Yoon Do-hyun, were sent to Pyongyang in North Korea for performance on March 31st and April 3rd in 2018. Kim Jung-un also attended as an audience. 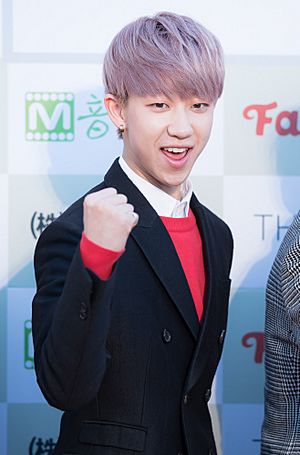 K-pop's increasing popularity forms part of Hallyu, or the Korean Wave, which refers to the popularity of South Korean culture in other countries. K-pop is increasingly making appearances on Western charts such as Billboard. The development of online social media has been a vital tool for the Korean music industry in reaching a wider audience. As part of the Korean Wave, K-pop has been embraced by the South Korean government as a tool for projecting South Korea's soft power abroad, particularly towards overseas youth. In August 2014, the prominent British news magazine The Economist dubbed Korean pop culture "Asia’s foremost trendsetter".

K-pop has began an entire industry encompassing music production houses, event management companies, music distributors, and other merchandise and service providers. The three biggest companies in terms of sales and revenue are S.M. Entertainment, YG Entertainment and JYP Entertainment, often referred to as the 'Big Three'. These record labels also function as representative agencies for their artists. They are responsible for recruiting, financing, training, and marketing new artists as well as managing their musical activities and public relations. Currently, the agency with the greatest market share is S.M. Entertainment. In 2011, together with Star J Entertainment, AM Entertainment, and Key East, the Big Three companies founded the joint management company United Asia Management.

All content from Kiddle encyclopedia articles (including the article images and facts) can be freely used under Attribution-ShareAlike license, unless stated otherwise. Cite this article:
K-pop Facts for Kids. Kiddle Encyclopedia.