Kids Encyclopedia Facts
Not to be confused with Southeast Asia or South Asia. 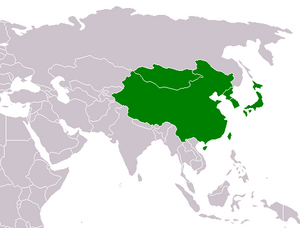 These are the countries and territories in East Asia:

The culture of East Asia has largely been influenced by China, as it was the civilization that had the most dominant influence in the region throughout the ages that ultimately laid the foundation for East Asian civilization. The vast knowledge and ingenuity of Chinese civilization and the classics of Chinese literature and culture were seen as the foundations for a civilized life in East Asia. Imperial China served as a vehicle through which the adoption of Confucian ethical philosophy, Chinese calendar system, political and legal systems, architectural style, diet, terminology, institutions, religious beliefs, imperial examinations that emphasized a knowledge of Chinese classics, political philosophy and cultural value systems, as well as historically sharing a common writing system reflected in the histories of Japan and Korea. The Imperial Chinese tributary system was the bedrock of network of trade and foreign relations between China and its East Asian tributaries, which helped to shape much of East Asian affairs during the ancient and medieval eras. Through the tributary system, the various dynasties of Imperial China facilitated frequent economic and cultural exchange that influenced the cultures of Japan and Korea and drew them into a Chinese international order. The Imperial Chinese tributary system shaped much of East Asia's foreign policy and trade for over two millennia due to Imperial China's economic and cultural dominance over the region, and thus played a huge role in the history of East Asia in particular. The relationship between China and its cultural influence on East Asia has been compared to the historical influence of Greco-Roman civilization on Europe and the Western World.

All content from Kiddle encyclopedia articles (including the article images and facts) can be freely used under Attribution-ShareAlike license, unless stated otherwise. Cite this article:
East Asia Facts for Kids. Kiddle Encyclopedia.