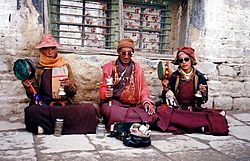 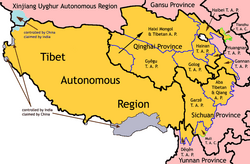 Areas in which concentrations of ethnic Tibetans live within China.

The Tibetan people (Tibetan: བོད་པ་) are an ethnic group that is native to Tibet. They number about 7.8 million. In 2014, there were 7.5 million Tibetans living in Tibet and the 10 Tibetan Autonomous Prefectures in Gansu, Qinghai and Sichuan. Large populations of Tibetans live outside of Tibet, in other parts of China, and in India, Nepal and Bhutan.

Tibetans speak the Tibetic languages. Many of these languages are cannot be understood by each other. These languages are also spoken by people in Baltistan, Ladakh, Nepal, Sikkim and Bhutan. The main language among Tibetans in Tibet is the Central Tibetan language.

Most Tibetans practice Tibetan Buddhism. Some practice the native Bön religion. There is a small Muslim minority.

All content from Kiddle encyclopedia articles (including the article images and facts) can be freely used under Attribution-ShareAlike license, unless stated otherwise. Cite this article:
Tibetan people Facts for Kids. Kiddle Encyclopedia.