Bhutan (officially called Kingdom of Bhutan) is a small country in the Himalaya mountains of South Asia. It is ruled by King Jigme Khesar Namgyel Wangchuck, who has been king since 2006. Bhutan was founded in 1644 by Shabdrung Ngawang Namgyel. The Bhutanese people are proud that they have always been an independent country. Bhutan's capital city is Thimphu. The official language is Dzongkha.

About 700,000 people live in Bhutan. The people and government of Bhutan are proud of their culture which is based on Tibetan Buddhism. 97% of Bhutan's people are Buddhist.

Until 1974 Bhutan was closed to the outside world. Now people can visit the country, but only in small numbers. The only airport is in Paro district. The country is bordered on the south by the Republic of India and on the north by China. The Indian state of Sikkim separates Bhutan and Nepal. The main export of Bhutan is hydroelectricity which is sold to India. The economy of Bhutan is very small but is growing quickly. The currency is the Ngultrum, which is pegged at par with the Indian rupee.

The Royal Bhutan Army is Bhutan's military service. It includes the Royal Bodyguard and the Royal Bhutan Police. Membership is voluntary, and the minimum age for recruitment is 18. The standing army numbers about 16,000 and is trained by the Indian Army. Being a landlocked country, Bhutan has no navy. It also has no air force or army aviation corps. The Army relies on Eastern Air Command of the Indian Air Force for air assistance. 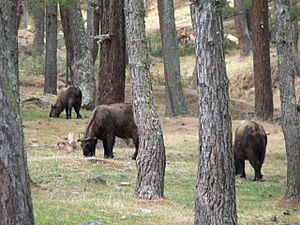 The Takin is Bhutan's national animal.

More than 770 species of bird and 5,400 species of plants are known to occur throughout the kingdom. Bhutan has a rich primate life with rare species such as the golden langur.

Bhutan is divided into 20 districts. Locally these are named dzongkhags. The districts are:

The major cities of Bhutan are: 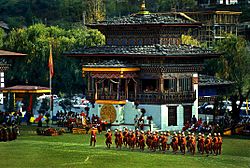 Changlimithang Stadium, during a parade.

Bhutan's national sport is archery. Competitions are held regularly in most villages. Cricket has gained popularity in Bhutan, particularly since the introduction of television channels from India. The Bhutan national cricket team is one of the more successful affiliate nations in the region. Football is also an increasingly popular sport.

All content from Kiddle encyclopedia articles (including the article images and facts) can be freely used under Attribution-ShareAlike license, unless stated otherwise. Cite this article:
Bhutan Facts for Kids. Kiddle Encyclopedia.