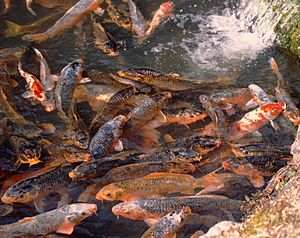 Koi in a pond

The Carp is a fish that lives in fresh water, such as rivers and lakes. In Europe and Asia carp are loved as a fishing and eating fish. However, carp are a really big problem in countries such as the U.S. and Australia. They make the water dirty by causing the mud at the bottom to move and in these countries people hate them.

Some popular ornamental fishes like the koi and goldfish are also carp.

Aquaculture production of cyprinids by species in million tonnes, 1950–2010, as reported by the FAO.

Various species of carp have been domesticated and reared as food fish across Europe and Asia for thousands of years. These various species appear to have been domesticated independently, as the various domesticated carp species are native to different parts of Eurasia. For example, the common carp, Cyprinus carpio, is originally from Central Europe. Several carp species (collectively known as Asian carp) were domesticated in East Asia. Carp that are originally from South Asia, for example catla (Gibelion catla), rohu (Labeo rohita) and mrigal (Cirrhinus cirrhosus), are known as Indian carp. Their hardiness and adaptability have allowed domesticated species to be propagated all around the world.

Although the carp was an important aquatic food item, as more fish species have become readily available for the table, the importance of carp culture in Western Europe has become less important. Demand has declined, partly due to the appearance of more desirable table fish such as trout and salmon through intensive farming, and environmental constraints. However, fish production in ponds is still a major form of aquaculture in Central and Eastern Europe, including the Russian Federation, where most of the production comes from low or intermediate-intensity ponds. In Asia, the farming of carp continues to surpass the total amount of farmed fish volume of intensively sea-farmed species, such as salmon and tuna. 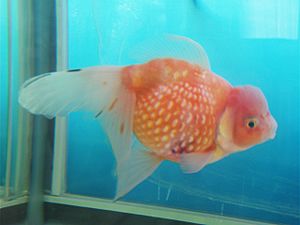 Carp, along with many of their cyprinid relatives, are popular ornamental aquarium and pond fish. The two most notable ornamental carps are goldfish and koi. Goldfish and koi have advantages over most other ornamental fishes, in that they are tolerant of cold (they can survive in water temperatures as low as 4°C), can survive at low oxygen levels, and can tolerate low water quality. 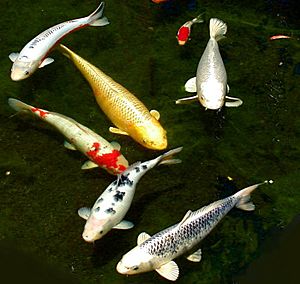 Goldfish (Carassius auratus) were originally domesticated from the Prussian carp (Carassius gibelio), a dark greyish-brown carp native to Asia. They were first bred for color in China over a thousand years ago. Due to selective breeding, goldfish have been developed into many distinct breeds, and are found in various colors, color patterns, forms and sizes far different from those of the original carp. Goldfish were kept as ornamental fish in China for hundreds of years before being introduced to Japan in the 15th century, and to Europe in the late 17th century.

Koi are a domesticated variety of common carp (Cyprinus carpio) that have been selectively bred for color. The common carp was introduced from China to Japan, where selective breeding of the common carp in the 1820s in the Niigata region resulted in koi. In Japanese culture, koi are treated with affection, and seen as good luck. They are popular in other parts of the world as outdoor pond fish. 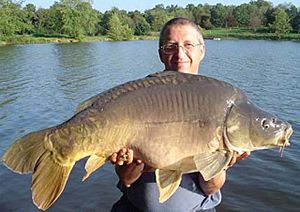 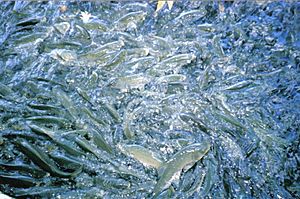 Izaak Walton said about carp in The Compleat Angler, "The Carp is the queen of rivers; a stately, a good, and a very subtle fish; that was not at first bred, nor hath been long in England, but is now naturalised." 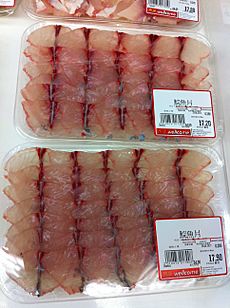 All content from Kiddle encyclopedia articles (including the article images and facts) can be freely used under Attribution-ShareAlike license, unless stated otherwise. Cite this article:
Carp Facts for Kids. Kiddle Encyclopedia.