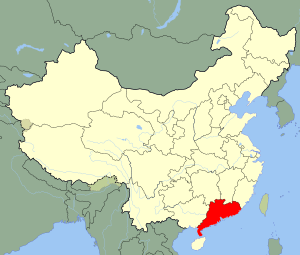 Guangdong (Chinese: 广东省) is a province on the southern coast of China. The meaning of the name in Chinese is "east of the expanse" or "expanse's east". It has a higher population and GDP than any other province in China. Its capital city is Guangzhou. Guangdong has 49 districts, 30 county-level cities, 42 counties, and three autonomous counties.

Guangdong has an area of 177,900 km2 (68,700 sq mi) and is the 15th biggest province in China. In 2008, more than 95,440,000 people were living in Guangdong. They speak several different kinds of dialects. More than half of the people speak Yue Chinese, which is also the main dialect in the neighboring Hong Kong, while Min Chinese and Hakka Chinese each has about 20% of the total speakers.

All content from Kiddle encyclopedia articles (including the article images and facts) can be freely used under Attribution-ShareAlike license, unless stated otherwise. Cite this article:
Guangdong Facts for Kids. Kiddle Encyclopedia.