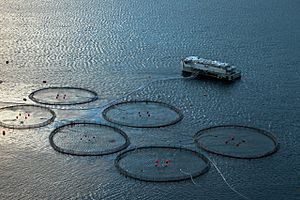 Raising Salmon on the Faroe islands

A fish farm is a place where fish are bred. In most cases, this is done for food. There are two basic types of fish farms:

The most common fish species raised by fish farms are salmon, carp, tilapia, catfish and cod.

There are many problems related to fish farming:

All content from Kiddle encyclopedia articles (including the article images and facts) can be freely used under Attribution-ShareAlike license, unless stated otherwise. Cite this article:
Fish farm Facts for Kids. Kiddle Encyclopedia.