Catfish are an order of teleost fish, the Siluriformes. There are about 40 families in the order. Siluriformes) are a very diverse group of bony fish. Named for their prominent barbels, which resemble a cat's whiskers, catfish range in size and behavior from the heaviest, the Mekong giant catfish from Southeast Asia and the longest, the wels catfish of Eurasia, to detritivores (species that eat dead material on the bottom), and even to a tiny parasitic species commonly called the candiru, Vandellia cirrhosa. There are armour-plated types and also naked types, neither having scales. Despite their common name, not all catfish have prominent barbels; what defines a fish as being in the order Siluriformes are in fact certain features of the skull and swimbladder. Catfish are of considerable commercial importance; many of the larger species are farmed or fished for food. Many of the smaller species, particularly the genus Corydoras, are important in the aquarium hobby.

Extant catfish species live in inland or coastal waters of every continent except Antarctica. Catfish have inhabited all continents at one time or another. Catfish are most diverse in tropical South America, Africa, and Asia. More than half of all catfish species live in the Americas. They are the only ostariophysans that have entered freshwater habitats in Madagascar, Australia, and New Guinea.

They are found primarily in freshwater environments of all kinds, though most inhabit shallow, running water habitats. Representatives of at least eight families are hypogean (live underground) with three families that are also troglobitic (inhabiting caves). Thus, catfishes are some of the most successful cave colonizers among fishes. One such species is Phreatobius cisternarum, known to live underground in phreatic habitats. Numerous species from the families Ariidae and Plotosidae, and a few species from among the Aspredinidae and Bagridae, are also found in marine environments.

Most catfish are adapted for a benthic lifestyle. In general, they are negatively buoyant, which means that they will usually sink rather than float due to a reduced gas bladder and a heavy, bony head. Catfish have a variety of body shapes, though most have a cylindrical body with a flattened ventrum to allow for benthic feeding.

A flattened head allows for digging through the substrate as well as perhaps serving as a hydrofoil. Most have a mouth that can expand to a large size and contains no incisiform teeth; catfish generally feed through suction or gulping rather than biting and cutting prey. However, some families, notably Loricariidae and Astroblepidae, have a suckermouth that allows them to fasten themselves to objects in fast-moving water. Catfish also have a maxilla reduced to a support for barbels; this means that they are unable to protrude their mouths as other fish such as carp. 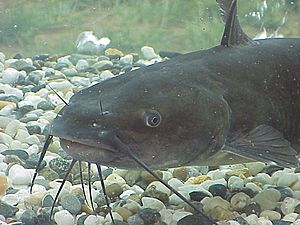 The channel catfish has four pairs of barbels.

Catfish may have up to four pairs of barbels: nasal, maxillary (on each side of mouth), and two pairs of chin barbels, although pairs of barbels may be absent, depending on the species. Because their barbels are more important in detecting food, the eyes on catfish are generally small. Like other ostariophysans, they are characterized by the presence of a Weberian apparatus. Their well-developed Weberian apparatus and reduced gas bladder allow for improved hearing as well as sound production. 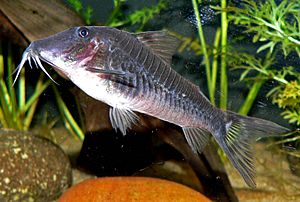 The armor plates are evident in Corydoras semiaquilus.

Catfish have no scales; their bodies are often naked. In some species, the mucus-covered skin is used in cutaneous respiration, where the fish breathes through its skin. In some catfish, the skin is covered in bony plates called scutes; some form of body armor has evolved a number of times within the order. In loricarioids and in the Asian genus Sisor, the armor is primarily made up of one or more rows of free dermal plates. Similar plates are found in large specimens of Lithodoras. These plates may be supported by vertebral processes, as in scoloplacids and in Sisor, but the processes never fuse to the plates or form any external armor. By contrast, in the subfamily Doumeinae (family Amphiliidae) and in hoplomyzontines (Aspredinidae), the armor is formed solely by expanded vertebral processes that form plates. Finally, the lateral armor of doradids, Sisor, and hoplomyzontines consists of hypertrophied lateral line ossicles with dorsal and ventral lamina. 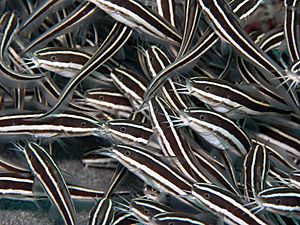 A sting from the striped eel catfish, Plotosus lineatus, may be fatal.

All catfish, except members of Malapteruridae (electric catfish), possess a strong, hollow, bonified leading spine-like ray on their dorsal and pectoral fins. As a defense, these spines may be locked into place so that they stick outwards, which can inflict severe wounds. In several species catfish can use these fin rays to deliver a stinging protein if the fish is irritated. This venom is produced by glandular cells in the epidermal tissue covering the spines. In members of the family Plotosidae, and of the genus Heteropneustes, this protein is so strong it may hospitalize humans unfortunate enough to receive a sting; in Plotosus lineatus, the stings may result in death.

Juvenile catfish, like most fish, have relatively large heads, eyes and posterior median fins in comparison to larger, more mature individuals. These juveniles can be readily placed in their families, particularly those with highly derived fin or body shapes; in some cases identification of the genus is possible. As far as known for most catfish, features that are often characteristic of species such as mouth and fin positions, fin shapes, and barbel lengths show little difference between juveniles and adults. For many species, pigmentation pattern is also similar in juveniles and adults. Thus, juvenile catfishes generally resemble and develop smoothly into their adult form without distinct juvenile specializations. Exceptions to this are the ariid catfishes, where the young retain yolk sacs late into juvenile stages, and many pimelodids, which may have elongated barbels and fin filaments or coloration patterns.

Head of the red-tailed catfish, Phractocephalus hemioliopterus, from the Amazon. This species is often offered for sale when juvenile to aquarists who little suspect it can attain 120 cm.

Catfish have one of the greatest range in size within a single order of bony fish. Many catfish have a maximum length of under 12 cm. Some of the smallest species of Aspredinidae and Trichomycteridae reach sexual maturity at only 1 centimetre (0.39 in).

The wels catfish, Silurus glanis, is the only native catfish species of Europe, besides the much smaller related Aristotle's catfish found in Greece. Mythology and literature record wels catfish of astounding proportions, yet to be proven scientifically. The average size of the species is about 1.2–1.6 m (3.9–5.2 ft), and fish more than 2 metres (6.6 ft) are very rare. The largest specimens on record measure more than 2.5 metres (8.2 ft) in length and sometimes exceeded 100 kilograms (220 lb).

The largest Ictalurus furcatus, caught in the Mississippi River on May 22, 2005, weighed 124 pounds (56 kg). The largest flathead catfish, Pylodictis olivaris, ever caught was in Independence, Kansas, weighing 123 lb 9 oz (56.0 kg). However, these records pale in comparison to a giant Mekong catfish caught in northern Thailand in May 1, 2005 and reported to the press almost 2 months later that weighed 293 kilograms (646 lb). This is the largest giant Mekong catfish caught since Thai officials started keeping records in 1981. The giant Mekong catfish are not well studied since they live in developing countries and it is quite possible that they can grow even larger. 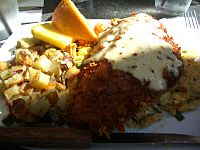 Catfish have been widely caught and farmed for food for hundreds of years in Africa, Asia, Europe, and North America. Judgments as to the quality and flavor vary, with some food critics considering catfish as being excellent food, others dismiss them as watery and lacking in flavour. In Central Europe, catfish were often viewed as a delicacy to be enjoyed on feast days and holidays. Migrants from Europe and Africa to the United States brought along this tradition, and in the southern United States catfish is an extremely popular food. The most commonly eaten species in the United States are the channel catfish and blue catfish, both of which are common in the wild and increasingly widely farmed. Catfish is eaten in a variety of ways; in Europe it is often cooked in similar ways to carp, but in the United States it is typically crumbed with cornmeal and fried. In Indonesia catfish is a very popular food. They are usually served grilled in street stalls called warung and eaten with vegetables, the dish is called Pecel Lele (Lele is the Indonesian word for catfish). In Malaysia catfish is called "Ikan Keli" ikan is referred to as fish, ikan keli is also usually fried added with spices according to preferences and is often eaten with steamed rice. The iridescent shark is a common food fish in parts of Asia. Vietnamese catfish cannot be legally marketed as catfish in the US, and is subsequently referred to as swai. Catfish are not halal[1] or Kosher, because the adult fish have no scales. Catfish is also high in Vitamin D.

Catfish are easy to farm in warm climates, leading to inexpensive and safe food at local grocers. Ictalurids are cultivated in North America (especially in the Deep South, with Mississippi being the largest domestic catfish producer). Channel catfish (Ictalurus punctatus) supports a $450 million/yr aquaculture industry. In Central Louisiana, Morgan W. Walker, Jr., an Alexandria businessman, in 1970 converted a 1,100-acre cattle ranch into catfish ponds to raise fish on a mass scale for sale and consumption.

Catfish raised in inland tanks or channels are considered safe for the environment, since their waste and disease should be contained and not spread to the wild.

In Asia, many catfish species are important as food. Several walking catfish (Clariidae) and shark catfish (Pangasiidae) species are heavily cultured in Africa and Asia. Exports of one particular shark catfish species from Vietnam, Pangasius bocourti, has met with pressures from the U.S. catfish industry. In 2003, The United States Congress passed a law preventing the imported fish from being labeled as catfish. As a result, the Vietnamese exporters of this fish now label their products sold in the U.S. as "basa fish." Trader Joe's has labeled frozen fillets of Vietnamese Pangasius Hypothalmus as "striper."

There is a large and growing ornamental fish trade, with hundreds of species of catfish, such as Corydoras and armored suckermouth catfish (often called plecos), being a popular component of many aquaria. Other catfish commonly found in the aquarium trade are banjo catfish, talking catfish, and long-whiskered catfish.

Most catfish do not harm people, but some of them can cause problems. It is said that the candiru can enter the human urethra, where they stay as parasites. In normal life they are parasites on fish gills.

The Malapteruridae are a family of electric catfish. Several species of the family can produce an electric shock of up to 350 volts using electroplaques of an electric organ.

All content from Kiddle encyclopedia articles (including the article images and facts) can be freely used under Attribution-ShareAlike license, unless stated otherwise. Cite this article:
Catfish Facts for Kids. Kiddle Encyclopedia.