The flathead catfish (Pylodictis olivaris), also called by several common names including mudcat or shovelhead cat, is a large species of North American freshwater catfish in the family Ictaluridae. It is the only species of the genus Pylodictis. Ranging from the lower Great Lakes region to northern Mexico, it has been widely introduced and is an invasive species in some areas. The closest living relative of the flathead catfish is the much smaller widemouth blindcat, Satan eurystomus.

The native range of the flathead catfish includes a broad area west of the Appalachian Mountains encompassing large rivers of the Mississippi, Missouri, and Ohio basins. The range extends as far north as Canada, as far west as Texas, and south to the Gulf of Mexico including northeastern Mexico. The flathead catfish cannot live in full-strength seawater (which is about 35 parts per thousand or about 35 grams of salt per liter of water), but it can survive in 10 ppt for a while and thrive in up to about 5 ppt.

The flathead catfish prefers live prey. It is a voracious carnivore and feeds primarily on fishes, insects, annelid worms, and crustaceans. It also feeds on other small catfish and almost anything that moves and makes vibration. They are known to eat crayfish, American gizzard shad (Dorosoma cepedianum), insects and larvae, channel catfish (Ictalurus punctatus), drum (Aplodinotus grunniens), other flatheads, green sunfish (Lepomis cyanellus), and carp. Insect larvae are the major prey type until an individual reaches approximately 100 mm (3.9 in) in total length, at which point the diet expands to include crayfish and small fishes. Individuals above 250 mm (9.8 in) in length feed almost exclusively on other fishes.

Spawning of P. olivaris occurs in late June and early July, and the nests are made in areas with submerged logs and other debris. The males, which also build the nests, fiercely and tirelessly defend and fan the clutch. The size of the clutch varies proportionately to the size of the female; an average of 2,640 eggs per kilogram of fish are laid.

The fry frequent shallow areas with rocky and sandy substrates, where they feed on insects and worms such as annelids and polychaetes. Young flathead catfish are also cannibalistic, which has largely precluded their presence in aquaculture. 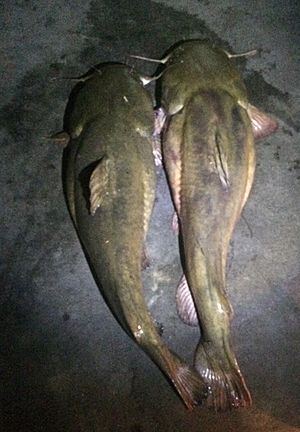 These 35- to 40-lb flathead catfish were caught in the Susquehanna River in late June 2015 on live bluegills.

Sport fishing for flathead catfish using either rod and reel, limb lines, or bare hands (noodling) can be an exciting pastime. Anglers target this species in a variety of waterways, including small rivers (barely large enough for a canoe), large rivers (such as the Missouri, Mississippi, Ohio, Tennessee and Colorado Rivers), and reservoirs. A common element of flathead catfish location is submerged wood cover such as logs and rootwads which often collect at bends in rivers. A good flathead spot usually also includes relatively deep water compared to the rest of a particular section of river, a moderate amount of current, and access to plentiful baitfish such as river herring, shad, carp, drum, panfish, or suckers. Anglers targeting large flathead catfish usually use stout tackle such as medium-heavy or heavy action rods from 6–10 ft (1.8–3.0 m) in length with large line-capacity reels and line ranging from 20–80 pounds-force (89–356 N) test breaking strength. Generally large live baits are preferred such as river herring, shad, sunfish (such as bluegill), suckers, carp, goldfish, drum, and bullheads ranging from 5–12 in (13–30 cm) in length.

All content from Kiddle encyclopedia articles (including the article images and facts) can be freely used under Attribution-ShareAlike license, unless stated otherwise. Cite this article:
Flathead catfish Facts for Kids. Kiddle Encyclopedia.