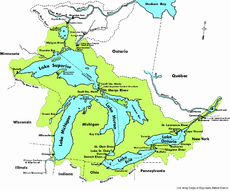 View from space of the Great Lakes

The Great Lakes are five large lakes in east-central North America. They hold 21% of the world's surface fresh water.

All together, by volume, they are the largest group of fresh water lakes in the world. No one of the Lakes is larger than Lake Baikal (Russia) or Lake Tanganyika (East Africa).

Though the five lakes have separate basins, they form a single, connected body of freshwater. The lakes connect the east-central interior of North America to the Atlantic Ocean. Lakes Michigan, Huron and Erie are approximately equally high and ships can easily pass from one to the next. Water flows from Lake Superior and Lake Michigan into Lake Huron; then through the Detroit River into Lake Erie; then through Niagara Falls into Lake Ontario; and then through the Saint Lawrence River to the Atlantic Ocean. Water also drains from the Chicago River on the south.

Many rivers flow through a large watershed into the lakes. The lakes have about 35,000 islands. The Great Lakes region includes the five lakes and many thousands of smaller lakes, often called inland lakes.

The Great Lakes are home to a variety of species of fish and other organisms. In recent years, overfishing caused a decline in lake trout. The drop in lake trout increased the alewife population. In response, the government introduced salmon as a predator to decrease the alewife population. This program was so successful that the salmon population rose rapidly, and the states surrounding Lake Michigan promoted 'salmon snagging'. This has been made illegal in all of the Great Lakes states except for a limited season in Illinois. Lake Michigan is now being stocked with several species of fish. However, several invader species such as lampreys, round goby, and zebra mussels threaten the native fish populations.

Accidentally introduced species are a big problem. Since the 19th century about 160 species have invaded the Great Lakes ecosystem, causing severe economic and ecological impacts. According to the Inland Seas Education Association, they deprive fish of food, cause blooms of toxic algae, and foul boats, spawning areas and drinking water intakes. On average a new invasive species enters the Great Lakes every eight months.

Two important infestations in the Great Lakes are the zebra mussel, first discovered in 1988, and the quagga mussel in 1989. These molluscs are efficient filter feeders. They compete with native mussels, and also reduce available food and spawning grounds for fish.

Also, the mussels hurt utility and manufacturing industries by clogging or blocking pipes. The U.S. Fish and Wildlife Service estimates that the economic impact of the zebra mussel will be about $5 billion over the next decade. Because the quagga mussel is good at filtering plankton from the lake water, sunlight reaches deeper into the lake. This increases the growth of algae.

Chemicals from industrial plants run off the land into rivers and arrive in the lakes. Some of these chemicals are highly toxic, such as mercury. Contaminated water from sewer overflows also reaches the lakes, and beaches get closed because of the threat of pathogenic bacteria.

All content from Kiddle encyclopedia articles (including the article images and facts) can be freely used under Attribution-ShareAlike license, unless stated otherwise. Cite this article:
Great Lakes Facts for Kids. Kiddle Encyclopedia.