Escanaba ( ES-kə-NAH-bə), commonly shortened to Esky, is a port city in Delta County in the U.S. state of Michigan, located on Little Bay de Noc in the state's Upper Peninsula. The population was 12,616 at the 2010 census, making it the third-largest city in the Upper Peninsula after Marquette and Sault Ste. Marie. It is the seat of government of Delta County.

The word "Escanaba" roughly translates from various regional native languages to "land of the red buck" although some people maintain that it refers to "flat rock". Escanaba was an Ojibwa village in the early 19th century. As an American settlement, Escanaba began as a port town in the mid-19th century, gaining importance to the Union as a shipping point for iron ore, lumber and copper during the Civil War. In his poem "The Song of Hiawatha", Henry Wadsworth Longfellow described how Hiawatha "crossed the rushing Esconaba" referring to the river. Located on Little Bay de Noc at the northern edge of Lake Michigan, Escanaba continues to serve as an important shipping point for iron ore to other Great Lakes ports, especially south to Chicago and northern Indiana. The local paper mill, for many years Mead Corporation's Publishing Paper Division, is currently operated by NewPage Corporation; located on the outskirts of the city alongside the Escanaba River, it is now the area's largest employer.

As shipping increased, a lighthouse was needed to warn of a sand shoals that reached out into Little Bay de Noc from Sand Point, a sandspit located just south of and adjacent to the harbor area. The United States Lighthouse Service approved construction of the Sand Point Lighthouse at a cost of $11,000. Construction began in the fall of 1867 and was completed in early spring 1868. It was deactivated in 1939, and was used by the United States Coast Guard to house seaman assigned to Escanaba. The building was completely restored to its original design in the late 1980s, and placed on the National Register of Historic Places. 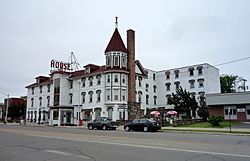 The House of Ludington is a landmark historic hotel in downtown Escanaba. Originally built in 1865 as the Gaynor House Hotel, it was renamed after lumberman Nelson Ludington in 1871. It was rebuilt as a brick structure in the Queen Anne Style in 1883, becoming the New Ludington Hotel.

Bay de Noc Community College, a public 2-year college, was founded in the city in 1962.

According to the United States Census Bureau, the city has a total area of 16.50 square miles (42.73 km2), of which 12.88 square miles (33.36 km2) is land and 3.62 square miles (9.38 km2) is water. Escanaba is home to one the safest natural harbors in the upper Great Lakes, which makes it a natural destination for boaters. Ludington Park, a three-quarter mile stretch of lake shore where the city's easternmost point extends into Little Bay de Noc, is one of the largest city parks in Michigan. Escanaba's Harbor Tower, an 18 story apartment building, is the tallest building in Michigan's Upper Peninsula. 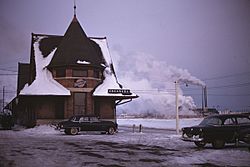 Escanaba Middle School; the school board opted to completely renovate the historic 1930s downtown building instead of moving it outside of town.

Although politically a part of the state of Michigan, Escanaba and the western Upper Peninsula of Michigan sometimes have closer cultural ties to the state of Wisconsin. Tourism has become significant for the local economy. Tourist draws include Lake Michigan beaches and local fishing and hunting opportunities. Most visitors come from Wisconsin and Illinois.

In January 1968, Green Bay Packers coach Vince Lombardi's daughter was married in Escanaba at St. Anne's Church. Upon finding out his then-unwed daughter was pregnant, Lombardi, who was vacationing in Florida at the time, insisted she drive to Michigan to get married rather than doing it Green Bay, in order to keep the news out of the papers.

This climatic region is typified by large seasonal temperature differences, with warm to hot (and often humid) summers and cold (sometimes severely cold) winters. According to the Köppen Climate Classification system, Escanaba has a humid continental climate, abbreviated "Dfb" on climate maps. 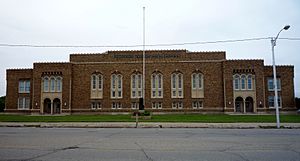 In 2003, the school board opted to completely renovate the historic 1930's junior high school, rather than move it outside of town. Escanaba Area Public Schools operate the public schools in Escanaba, which includes various elementary schools, the middle school, and the high school. There is also a private school, Holy Name Catholic School, which teaches pre-school children all the way up to eighth grade. Bay College, a public 2-year college, was founded in the city in 1962. It offers various two year degrees and certificate programs ranging from welding, public safety, business, nursing, among others.

All content from Kiddle encyclopedia articles (including the article images and facts) can be freely used under Attribution-ShareAlike license, unless stated otherwise. Cite this article:
Escanaba, Michigan Facts for Kids. Kiddle Encyclopedia.