Marquette is a city in the U.S. state of Michigan and the county seat of Marquette County. The population was 21,355 at the 2010 census, making it the most populated city of the Upper Peninsula. Marquette is a major port on Lake Superior, known primarily for shipping iron ore, and is the home of Northern Michigan University. In 2012, Marquette was listed among the 10 best places to retire in the U.S. by CBS MoneyWatch. 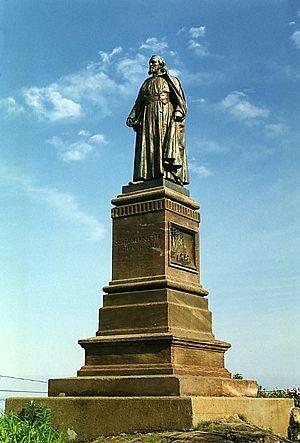 Statue of Jacques Marquette in Marquette

The land around Marquette was known to French missionaries of the early 17th century and the trappers of the early 19th century. Development of the area did not begin, however, until 1844, when William Burt and Jacob Houghton (the brother of geologist Douglass Houghton) discovered iron deposits near Teal Lake west of Marquette. In 1845, Jackson Mining Company, the first organized mining company in the region, was formed.

The village of Marquette began on September 14, 1849, with the formation of a second iron concern, the Marquette Iron Company. Three men participated in organizing the firm: Robert J. Graveraet, who had prospected the region for ore; Edward Clark, agent for Waterman A. Fisher of Worcester, Massachusetts, who financed the company, and Amos Rogers Harlow. The village was at first called New Worcester, with Harlow as the first postmaster. On August 21, 1850, the name was changed to honor Jacques Marquette, the French Jesuit missionary who had explored the region. A second post office, named Carp River, was opened on October 13, 1851 by Peter White, who had gone there with Graveraet at age 18. Harlow closed his post office in August 1852. The Marquette Iron Company failed, while its successor, the Cleveland Iron Mining Company, flourished and had the village platted in 1854. The plat was recorded by Peter White. White's office was renamed as Marquette in April 1856, and the village was incorporated in 1859. It was incorporated as a city in 1871. 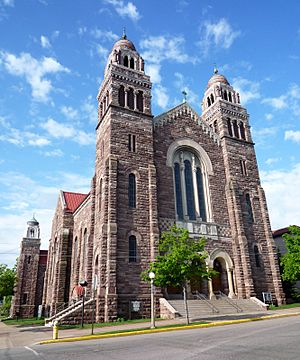 During the 1850s, Marquette was linked by rail to numerous mines and became the leading shipping center of the Upper Peninsula. The first ore pocket dock, designed by an early town leader, John Burt, was built by the Cleveland Iron Mining Company in 1859. By 1862, the city had a population of over 1,600 and a soaring economy.

In the late 19th century, during the height of iron mining, Marquette became nationally known as a summer haven. Visitors brought in by Great Lakes passenger steamships filled the city's hotels and resorts.

South of the city, K. I. Sawyer Air Force Base was an important Air Force installation during the Cold War, host to B-52H bombers and KC-135 tankers of the Strategic Air Command, as well as a fighter interceptor squadron. The base closed in September 1995, and is now the county's Sawyer International Airport.

Marquette continues to be a shipping port for hematite ores and, today, enriched iron ore pellets, from nearby mines and pelletizing plants. About 7.9 million gross tons of pelletized iron ore passed through Marquette's Presque Isle Harbor in 2005.

The Roman Catholic Bishop Frederic Baraga is buried at St. Peter's Cathedral, which is the center for the Diocese of Marquette.

In addition to the Marquette #1 Post Office there is the "Northern Michigan University Bookstore Contract Station #384".

The first day of issue of a postal card showing Bishop Frederic Baraga took place in Marquette on June 29, 1984, and that of the Wonders of America Lake Superior stamp on May 27, 2006.

Marquette has a humid continental climate (Köppen climate classification Dfb) with four distinct seasons that is strongly moderated by Lake Superior and is located in Plant Hardiness zone 5b. Winters are long and cold with a January average of 18.8 °F (−7.3 °C). Winter temperatures are slightly warmer than inland locations at a similar latitude due to the release of the heat stored by the lake, which moderates the climate. On average, there are 11.6 days where the temperature reaches below 0 °F (−18 °C) and most days during winter remain below freezing. Being located in the snowbelt region, Marquette receives a significant amount of snowfall during the winter months, mostly from lake-effect snow. Because Lake Superior rarely freezes over completely, this enables lake effect snow to persist throughout winter, making Marquette the third snowiest location in the contiguous United States as reported by the National Oceanic and Atmospheric Administration with an average annual snowfall of 149.1 inches (379 cm). The snow depth in winter usually exceeds 10 inches (25 cm).

The warmest months, July and August, each average 66.6 °F (19.2 °C), showing somewhat of a seasonal lag. The surrounding lake cools summertime temperatures and as a result, temperatures above 90 °F (32 °C) are rare, with only 3.4 days per year. Spring and fall are transitional seasons that are generally mild though highly variable due to the alternation of air masses moving quickly. Spring is usually cooler than fall because the surrounding lake is slow to warm than the land while in fall, the lake releases heat, warming the area.

Marquette receives 29 in (737 mm) of precipitation per year, which is fairly evenly distributed throughout the year, though September and October are the wettest months with January and February being the driest. The average window for nighttime freezes is October 15 thru May 7. The highest temperature ever recorded in Marquette was 108 °F (42 °C) on July 15, 1901 and the lowest was −33 °F (−36 °C) on February 8, 1861. Marquette receives an average of 2,294 hours of sunshine per year or 51% of possible sunshine, ranging from a low of 29% in December to a high of 68% in July. <section begin="weather box" />

There were 8,321 households of which 18.6% had children under the age of 18 living with them, 33.3% were married couples living together, 9.0% had a female householder with no husband present, 3.3% had a male householder with no wife present, and 54.5% were non-families. 38.2% of all households were made up of individuals and 11.8% had someone living alone who was 65 years of age or older. The average household size was 2.05 and the average family size was 2.71.

There were 8,071 households of which 23.0% had children under the age of 18 living with them, 37.2% were married couples living together, 10.2% had a female householder with no husband present, and 49.6% were non-families. 37.0% of all households were made up of individuals and 11.5% had someone living alone who was 65 years of age or older. The average household size was 2.13 and the average family size was 2.81.

Along with Northern Michigan University, the largest employers in Marquette are the Marquette School System, Marquette General Hospital (a regional medical center which is the only Level 2 Trauma center in the Upper Peninsula), Marquette Branch Prison, Pioneer Surgical Technology now part of RTI Surgical, and Charter Communications.

Marquette's port was the 140th largest in the United States in 2015, ranked by tonnage. 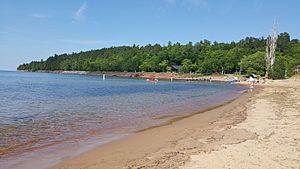 The city of Marquette has a number of parks and recreational facilities which are used by city and county residents. Presque Isle Park is Marquette's most popular park located on the north side of the city. It includes 323 acres (131 ha) of mostly forested land and juts out into Lake Superior. The park was designed by Frederick Law Olmsted, noted for designing Central Park in New York City. Amenities include a wooden band shell for concerts, a park pavilion, a gazebo, a marina, a concession stand, picnic tables, barbecue pits, walking/skiing trails, playground facilities, and Moosewood Nature Center. The city has two popular beaches, South Beach Park and McCarty's Cove. McCarty's Cove, flanked by the red U.S. Coast Guard Station lighthouse on its south shore, serves as a reprieve from hot summer days, where city and county residents alike take advantage of the cool, but tolerable, water temperatures and the cooling effects of the lake-generated sea breeze. Both beaches have picnic areas, grills, children's playgrounds and lifeguard stands. Other parks include Tourist Park, Founder's Landing, LaBonte Park, Mattson Lower Harbor Park, Park Cemetery, Shiras Park, Williams Park, Harlow Park, Pocket Park, Spring Street Park and Father Marquette Park. 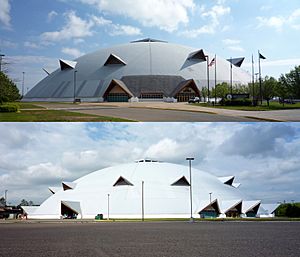 There are also numerous other recreational facilities located within the city. Lakeview Arena is best known for its use as an ice hockey facility, but it also hosts a number of public events. A skateboard park is located just outside the arena and open during the summer. Lakeview Arena was home to the Marquette Electricians and Marquette Senior High School's Redmen hockey team. In 1974, the arena replaced the historic Palestra, which had been located a few blocks away. Gerard Haley Memorial Baseball field home of the Marquette Blues and Reds is located in the north side along with numerous little league and softball fields. Marquette has the largest wooden dome in the world, the Superior Dome—unofficially but affectionately known as the YooperDome. During the football season, the Dome is used primarily for football on its newly renovated astro turf field. The turf was installed in July 2009. Northern Michigan University holds its home football games in the Dome, as does the Michigan High School Athletic Association with the upper peninsula's High School football playoffs. The dome also hosts numerous private and public events which draw in thousands from around the region. The Marquette Golf Club has brought international recognition to the area for its unique and dramatic Greywalls course, opened in 2005. The course features several panoramic views of Lake Superior and winds its way through rocky outcroppings, heaving fairways and a rolling valley, yet is located less than two miles (3 km) from the downtown area.

Marquette has an extensive network of biking and walking paths. The city has been gradually expanding the paths and has been promoting itself as a walkable and livable community. Cross Country ski trails are also located at Presque Isle Park and the Fit Strip.

The combination of hilly terrain (a 600-foot (180 m) vertical difference from top to bottom) and large area snow falls makes snowboarding and downhill skiing a reality on the edge of town.

The Presque Isle Harbor Ore Dock, an ore pocket dock, was built in 1912. Trains drop ore into the dock. Then chutes on the side of the dock lower to spill the ore into ships. Shown docked in the photo are the MV Lee A. Tregurtha (near) and the MV Kaye E. Barker (far).

Marquette is served by American Eagle and Delta Connection out of Sawyer International Airport (KSAW) with daily flights to Chicago and Detroit airports. Service to Minneapolis–Saint Paul will begin in March 2017. The city is served by a transportation bus system called the MarqTran that runs through the city and to nearby places such as Sawyer International Airport and Ishpeming. Indian Trails bus lines operates daily intercity bus service between Hancock and Milwaukee, Wisconsin, with a stop in Marquette. 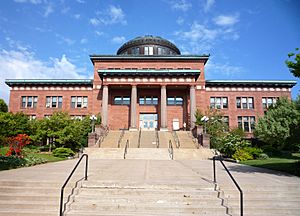 The Marquette County Courthouse was used for the courtroom scenes in the film Anatomy of a Murder.

All content from Kiddle encyclopedia articles (including the article images and facts) can be freely used under Attribution-ShareAlike license, unless stated otherwise. Cite this article:
Marquette, Michigan Facts for Kids. Kiddle Encyclopedia.