At the 2006 Winter Olympics in Turin, Italy, Davis became the first African American athlete to win a gold medal in an individual event at the Olympic Winter Games, winning the speedskating 1000 meter event. He also won a silver medal in the 1500 meter event. At the 2010 Winter Olympics in Vancouver, British Columbia, Canada, he repeated the feat, becoming the first man to successfully defend the 1000 meters and repeating as the 1500 meter silver medalist.

Davis won the silver medal at the 2004 World Allround Speed Skating Championships. He then proceeded to win the World Allround Championships in both 2005 and 2006. In 2009, he won the World Sprint Championships in Moscow, the site of his first World Allround Championship victory. When Davis won those events, he became the second male skater to win both the Sprint and Allround in his career, after Eric Heiden. He has won six World Single Distance Championships titles, three at 1500 meters (in 2004, 2007 and 2009) and three at 1000 meters (in 2007, 2008 and 2011), and he led the United States to its first and only World Championship gold medal in the Team Pursuit event in 2011. He has won ten career Overall World Cup titles, six at 1000 meters (in 2006, 2008–10, 2012, 2014) and four at 1500 meters (2008–2011). Davis also earned the title of Grand World Cup Champion for the 2013–14 season, earning the most points across all distances. His 58 career individual victories on the ISU Speed Skating World Cup circuit (through March 2014) place him second all-time among men.

Davis has set a total of nine world records. He held the top spot on the world Adelskalender list after taking the lead from Sven Kramer in March 2009 for a little over ten years until Patrick Roest surpassed him in March 2019. The Adelskalender ranks the all-time fastest long track speed skaters by personal best times in the four World Allround Championship distances. Davis is known for his consistency and technical proficiency. Davis is a native of Chicago, Illinois, and trained at two U.S. Olympic training facilities, the Pettit National Ice Center in West Allis, Wisconsin, and the Utah Olympic Oval in Salt Lake City, Utah.

Davis was born on Friday, August 13, 1982, in Chicago, Illinois, to Reginald Shuck and Cherie Davis. His father selected the name "Shani" from an African name dictionary; the name translates "to adventure." His mother, Cherie, worked for a local lawyer who happened to be a speed skating official and who's son was an elite level speed skater. At the lawyer's suggestion, Cherie enrolled Shani at the Robert Crown Center in nearby Evanston when he was six years old.

Cherie was determined that her son would reach his maximum potential. She would wake Shani up in the morning to run a mile on a nearby track to build up his endurance. In order to be closer to his skating club, she and Davis moved from the South Side neighborhood of Hyde Park to Rogers Park on Chicago's North Side.

At 16, Davis was invited to Lake Placid, New York, to participate in a development program for young speed skaters. After training there for a year, Davis decided to pursue his Olympic dreams and moved to Marquette, Michigan, to further his training. There, he would graduate from Marquette Senior High School, where he ran track his senior year.

Davis earned spots on both the long track and short track teams at the 1999 junior world championship, simultaneously making the national team. In 2000, he made history by becoming the first U.S. skater to make the long and short track teams at the Junior World Teams, a feat he would accomplish again in 2001 and 2002. His height has always made him unique among short trackers, who are much shorter. The extra height made it easier for Davis to race low to the ice. Davis would go on to win a bronze medal in the Team Relay at the 2005 World Short Track Championships in Beijing, China, shared by U.S. teammates Apolo Ohno, Rusty Smith and Alex Izykowski.

Davis made the jump from junior competition to men's speed skating in 2003. In February of that year, he earned the title of North American long track champion, which qualified him for the World Championship in Gothenburg, Sweden. During the competition, Davis was not yet adjusted to skating in the men's division, and his scores were much lower than usual; he finished 16th overall.

In January 2004, Davis became a North American champion for the second consecutive year. He finished in second place overall in the 2004 World Allround Long Track Championships in Hamar, Norway. In March, Davis won the 1500 m at the men's World Single Distance Championships in Seoul, finishing the race in 1:48.64 in March 2004.

Davis set three world records in 2005 – two of them in Salt Lake City. At the World Championship Qualifier on January 9, 2005, he broke the 1500 m world record, recording a time of 1:43.33. He also set the world record for best overall time in the history of the Qualifiers – 149.359. A month later, Davis would win the World Champion all-round, scoring 150.778 points. In November, Davis would break another world record at the third World Cup match in the fall of 2005, skating the 1000 m in 1:07.03. Davis did not participate at the Olympic Trials in Salt Lake City in December 2005 because his performances in the Fall World Cup events had already pre-qualified him for the Olympic Team in the 1000 m, 1500 m and 5000 m events. 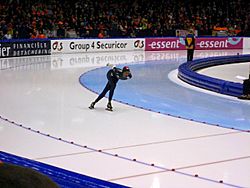 Davis during the World Cup in Heerenveen in 2007

Davis won the final 1000 m World Cup event of the 2006 season at Thialf, Heerenveen, with a time of 1:08.91, becoming the first skater to skate below 1:09 in Heerenveen and also winning the overall World Cup on the 1000 meters. He placed fourth overall in the 1500 meters World Cup, despite only competing in three of the five races.

Davis then defended his World Allround Championships title in Calgary in March 2006 with a world record allround score of 145.742. At the competition, Davis was paired with teammate Chad Hedrick in the 1500 meter race, and dramatically broke Hedrick's own world record with a time of 1:42.68, which Davis would later rebreak that year with a time of 1:42.32. Regarding his world allround title, Davis said, "To me, this is bigger than the Olympics. This medal is prestigious. Not only do you have to skate 500 meters, but you have to skate 10000, you have to skate a 1500 and a 5000 and you only have two days to do it."

In the 2007–08 season, Davis won overall world cup titles in the 1000 m and 1500 m, defended his 1000 m world title at the World Single Distance Championships held in Nagano, Japan, and tied for second in the 1500 m with Sven Kramer of the Netherlands.

In the 2008–09 season, Davis defended his world cup titles in the 1000 m and 1500 m. He broke world records in the 1000 m and 1500 m and won the 1500 world title at the World Single Distance Championships held in Vancouver, British Columbia, Canada. He placed third in 1000 m and won the 2009 World Sprint Speed Skating Championship in Moscow. He became only the second male skater in history—joining Eric Heiden—to win both the World Allround and World Sprint titles. 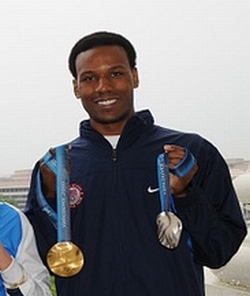 At the 2010 Winter Olympics in Vancouver, British Columbia, Canada, Davis competed in four long-track speed skating events: the 500, 1000, 1500 and 5000 meter races. All four of these events were held at the Richmond Olympic Oval, where Davis had held the track record in the 1000 and 1500 meter races, setting those records in 2009. Davis won the 1000-meter speed skating event, becoming the first man to win back-to-back 1000-meter Olympic speed skating gold medals and the only gold medal for speed skating from the United States at these games. Davis won in 1 minute and 8.94 seconds, finishing just 18/100ths of a second quicker than his rival, South Korea's Mo Tae-bum. Davis won a silver medal at the 1500 m distance, being defeated for the gold medal by Mark Tuitert of the Netherlands. Davis finished 12th in the 5000 meters and withdrew after a poor first race in the 500 meters.

He announced his retirement from skating in November 2019.

Davis trained at the Olympic speedskating center in Marquette, Michigan, where as of February 2010 he also was attending classes at Northern Michigan University.

Frozone, an African-American superhero with ice powers from the animated movie The Incredibles, was allegedly inspired by Shani Davis. Davis also inspired the creation of DC Inner City Excellence in Washington, DC. He continues to support and encourage youth affiliated with the DC-ICE program.

All content from Kiddle encyclopedia articles (including the article images and facts) can be freely used under Attribution-ShareAlike license, unless stated otherwise. Cite this article:
Shani Davis Facts for Kids. Kiddle Encyclopedia.