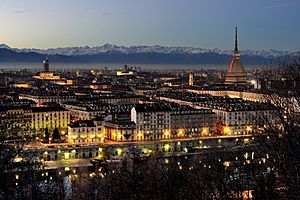 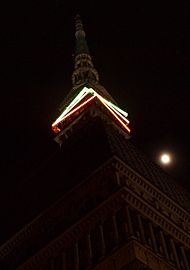 Mole Antonelliana, the symbol of Turin, lighted for the 150th Anniversary of Italian Unification 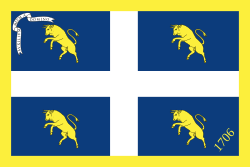 Turin is a major industrial city on the west bank of the Po river in Piedmont, northwest Italy. Over a 900,000 people live in it. Turin is the fourth largest city in Italy, after Rome, Milan and Naples. Turin is the capital of Piedmont. Fiat's first car factory was in Turin. The city was the host of the 2006 Winter Olympics. In Turin there are two major rivers the Po and the Dora, and two minor rivers the Stura and the Sangone.

All content from Kiddle encyclopedia articles (including the article images and facts) can be freely used under Attribution-ShareAlike license, unless stated otherwise. Cite this article:
Turin Facts for Kids. Kiddle Encyclopedia.