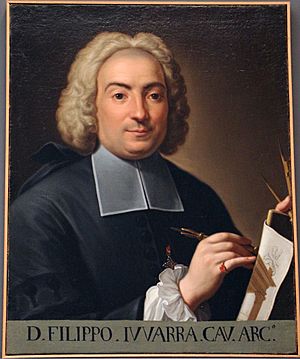 Painting of Filippo Juvarra around 1707 by Agostino Masucci

Filippo Juvarra was an architect from Italy who lived from 1678 to 1736. He was born in Messina. He designed many famous buildings, especially churches and palaces.

Here is a list of some buildings he designed:

All content from Kiddle encyclopedia articles (including the article images and facts) can be freely used under Attribution-ShareAlike license, unless stated otherwise. Cite this article:
Filippo Juvarra Facts for Kids. Kiddle Encyclopedia.