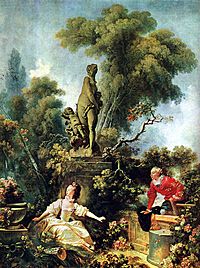 Rococo is an artistic style which originated in the 18th century in France. Often referred to merely as Late Baroque, the Rococo developed from the Baroque artistic movement. Whilst it kept several characteristics of the original style, including elaboration and ornate themes, it was also more playful and asymmetrical. The Rococo is associated with the reign of French king Louis XV (Louis XIV is associated with the Baroque, whilst Louis XVI with Neoclassicism, albeit his style started off as Rococo at the beginning of reign). Rococo's popularity was at its height towards the middle of the 18th century, fading out by the end in favour of Neoclassicism.

Rococo art and architecture was feminine, graceful, florid and ornate. Creamy and pastel-like colours were used for paintings, unlike the darker shades in Baroque art. Religion and politics were no longer necessarily the core theme of Rococo art, unlike the Baroque, and everyday life became more commonly represented. In such a way, Rococo art revolved around themes such as love, romance, fun, landscapes, and mere portraits. Additionally, Far Eastern themes became popular in Rococo, especially Chinoiserie. Famous Rococo artists include Boucher, Watteau and Fragonard, amongst several others.

The Rococo has been the focus of much discussion, analysis and criticism by art historians throughout history. It has been criticised over the years for being over-the-top, superficial and frivolous; in such a way, the term has even been used derogatively in various points of history. Nevertheless, Rococo art and theatre has also received praise for the elegance, "beauty", and "charm" of its artwork.

All content from Kiddle encyclopedia articles (including the article images and facts) can be freely used under Attribution-ShareAlike license, unless stated otherwise. Cite this article:
Rococo Facts for Kids. Kiddle Encyclopedia.