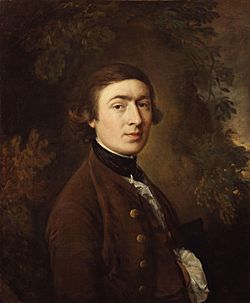 Thomas Gainsborough (14 May 1727 – 2 August 1788) was an 18th-century English portrait and landscape painter. He was born in Sudbury, Suffolk, England. He was the youngest son of John Gainsborough. When he was 13, he surprised his father by how well he drew with the pencil. Impressed, his father let him go to London to study art in 1740. In the 1740s, Gainsborough married Margaret Burr and began painting portraits more than landscapes. He had two daughters. In 1774, Gainsborough and his family moved to London. In 1780, he painted portraits of King George III. He died of cancer in London on 2 August 1788 at age 61 years.

In painting portraits he sometimes painted with brushes on sticks six feet long. This put him at the same distance from subject and canvas, set at right angles to each other.

All content from Kiddle encyclopedia articles (including the article images and facts) can be freely used under Attribution-ShareAlike license, unless stated otherwise. Cite this article:
Thomas Gainsborough Facts for Kids. Kiddle Encyclopedia.