Sarah Siddons (5 July 1755 – 8 June 1831) was a Welsh actress. She was the best-known actress who played tragedies of the 18th century. She was the older sister of John Philip Kemble, Charles Kemble, Stephen Kemble, Ann Hatton and Elizabeth Whitlock. She is very famous for the way she played the Shakespearean character Lady Macbeth. She grew to liking the character Lady Macbeth very much.

She was born Sarah Kemble in Brecon, Brecknockshire, Wales. She was the oldest daughter of Roger Kemble, an actor and manager. He travelled around with his company, which included most members of his family, and Sarah "Sally" Ward.

Acting was only just becoming a respectable profession for a woman. At first, her parents did not like the fact that she had chosen to become an actress.

In 1774, Siddons had her first success as Belvidera in Thomas Otway's Venice Preserved. Because of this role, David Garrick noticed her. Garrick later sent someone to see her act as Calista in Thomas Rowe's Fair Penitent. After this, she was engaged to appear at Drury Lane. She was inexperienced. Because of this, and other factors, her first appearances as Portia in the play The Merchant of Venice and in other parts were not well received. She received a note from the manager of Drury Lane saying that her services would not be required. She was, in her own words :

In 1777, she went to play in the provinces. For the next six years she worked in provincial companies, in particular those in York and Bath. Her fame grew. Her next Drury Lane appearance on 10 October 1782 was very different. She was an immediate sensation playing the title role in Garrick's adaptation of a play by Thomas Southerne, Isabella, or, The Fatal Marriage. 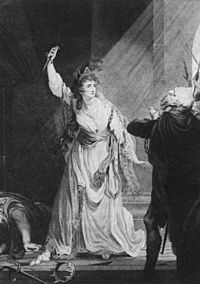 Sarah Siddons as Euphrasia in Arthur Murphy's The Grecian Daughter, at the Theatre Royal, Drury Lane, in 1782

Her most famous role was that of Lady Macbeth. Because she was very good at expressing emotion when she acted Lady Macbeth's murderous passions she could captivate her audience. Lady Macbeth was the play best adapted to her acting. She was tall and had a striking figure, brilliant beauty, powerfully expressive eyes, and solemn dignity of demeanour. This allowed her to claim the character as her own.

After Lady Macbeth she played Desdemona in Othello, Rosalind in As You Like It, Ophelia and Volumnia, all with great success. In Queen Catherine she discovered a role that was almost as well adapted to her acting powers as that of Lady Macbeth.

It was the beginning of twenty years in which she was the queen of Drury Lane. Her celebrity status has been called "mythical" and "monumental". By "the mid-1780s Siddons was established as a cultural icon." She mixed with the literary and social elites of London society. She knew people like Samuel Johnson, Edmund Burke, Hester Thrale Piozzi, and William Windham.

In 1802 she left Drury Lane. She then appeared on the stage of a rival theatre, Covent Garden, from time to time. It was there, on 29 June 1812, that she gave perhaps the most extraordinary farewell performance in theatre history. She was playing her most famous role, Lady Macbeth, and the audience refused to allow the play to continue after the end of the sleepwalking scene. Eventually, after tumultuous applause from the pit, the curtain reopened and Siddons was discovered sitting in her own clothes and character - whereupon she made an emotional farewell speech to the audience lasting eight minutes.

Mrs Siddons formally retired from the stage in 1812, but continued to appear on special occasions. Her last appearance was on 9 June 1819 as Lady Randolph in John Home's Douglas.

She began as a ladies maid to Lady Greathead at Guy’s Cliffe House, near the Saxon Mill, Coventry Road, Warks.

In 1773, at the age of 18, she married William Siddons, an actor. She was less lucky with her family. She had seven children but five of them died. Her marriage to William Siddons was the cause of many problems. They could not divorce, but they separated, and lived in different places.

Sarah Siddons died in 1831 in London. She is buried in Saint Mary's Cemetery at Paddington Green. 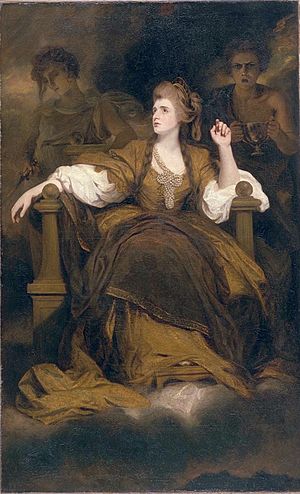 Sir Joshua Reynolds painted his famous portrait, "Mrs. Siddons as the Tragic Muse," in 1784 (see Infobox), and signed it on the hem of her dress, "for," he told her, "I have resolved to go down to posterity on the hem of your garment."

In 1950, Joseph Mankiewicz saw the portrait and decided that it would provide the setting for the opening scene of All About Eve. The scene opened in the ballroom of the then fictitious Sarah Siddons Society. The occasion is the presentation of the Sarah Siddons award statuette, modeled on Sarah Siddons as the Tragic Muse. In the climactic party scene, the painting is prominently displayed between Bette Davis and Marilyn Monroe. The portrait also presides over the final scene when Anne Baxter moves past it.

In 1957, Bette Davis posed as Sarah Siddons in a re-creation of the painting staged as part of the Pageant of the Masters.

All content from Kiddle encyclopedia articles (including the article images and facts) can be freely used under Attribution-ShareAlike license, unless stated otherwise. Cite this article:
Sarah Siddons Facts for Kids. Kiddle Encyclopedia.