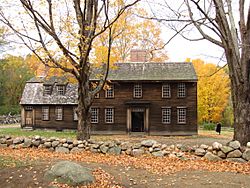 A tavern (saloon, bar) is a place where alcoholic drinks (such as beer, wine, or spirits) are served. While the word "tavern" used to be common in England, in the 19th century the word began to be seen as old fashioned. The current term today in England is "pub" which comes from public house. However, taverns remain a popular part of fantasy stories and games. The term is still commonly used in the United States.

All content from Kiddle encyclopedia articles (including the article images and facts) can be freely used under Attribution-ShareAlike license, unless stated otherwise. Cite this article:
Tavern Facts for Kids. Kiddle Encyclopedia.