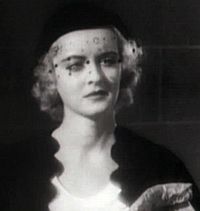 Bette Davis (April 5, 1908 – October 6, 1989) was an American actress of the stage, cinema and television. She was born in Lowell, Massachusetts. She was nicknamed "The Queen of Hollywood" or the "First Lady of the American Screen" and "The Fifth Warner Brother" during her career.

Davis had held the most Academy Award nominations for any actress (with ten) until Katharine Hepburn took her place with twelve.

The Kennedy Center honored Davis in 1987. She died of breast cancer in Neuilly-sur-Seine, France.

All content from Kiddle encyclopedia articles (including the article images and facts) can be freely used under Attribution-ShareAlike license, unless stated otherwise. Cite this article:
Bette Davis Facts for Kids. Kiddle Encyclopedia.