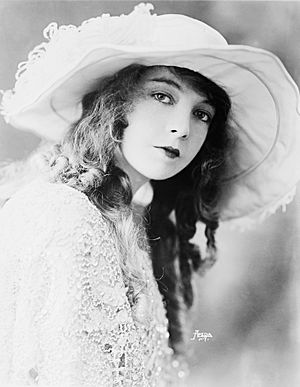 Lillian Diana Gish (October 14, 1893 – February 27, 1993) was an American actress. She was born in Springfield, Ohio. Gish came from a Episcopalian and Lutheran religious background. She was a descendant of a colonial minister and a Revolutionary War hero. Lillian was very young when her father abandoned his family. She and her sister Dorothy joined the acting profession with their mother. In 1912, their friend Mary Pickford introduced the sisters to D. W. Griffith. They got contracts with Biograph Studios. The sisters debuted in Griffith's short movie An Unseen Enemy in 1912. Lillian starred in many of Griffith's most famous movies. These included The Birth of a Nation, Intolerance, Broken Blossoms, Way Down East, and Orphans of the Storm. One of the famous images of Gish's silent movie years is the climax of Way Down East. Her character floats unconscious on an ice floe towards a waterfall, her long hair floating in the water. She made "talkies" (movies with sound), too. Her sound movie work was off and on. She was in the controversial western Duel in the Sun and Night of the Hunter. She did a lot of television work from the early 1950s until the 1980s. At the end of her career she appeared with Bette Davis in the 1987 movie The Whales of August. She never married or had children. She died in her sleep of natural causes on February 27, 1993. She is buried next to her sister Dorothy at Saint Bartholomew's Episcopal Church in New York City. Gish's career lasted 75 years, from 1912 to 1987. She was given the nickname "The First Lady of American Cinema". The American Film Institute (AFI) named Gish 17th among the greatest female stars of all time. She received an Honorary Academy Award in 1971. In 1984 she received an AFI Life Achievement Award.

All content from Kiddle encyclopedia articles (including the article images and facts) can be freely used under Attribution-ShareAlike license, unless stated otherwise. Cite this article:
Lillian Gish Facts for Kids. Kiddle Encyclopedia.