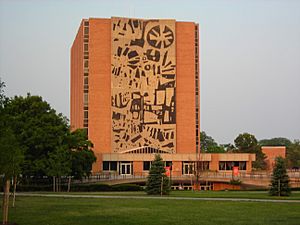 Jerome Library which is on the campus.

The athletics teams of the university are called the Falcons. They have 7 varsity teams for men and 10 for women, most of which compete in the Mid-American Conference. The men's ice hockey team plays in the Western Collegiate Hockey Association, but is one of seven WCHA men's teams (out of 10) that will leave that league after the 2020–21 season to form a new Central Collegiate Hockey Association. Bowling Green had been a member of the first CCHA for that league's entire history (1971–2013).

All content from Kiddle encyclopedia articles (including the article images and facts) can be freely used under Attribution-ShareAlike license, unless stated otherwise. Cite this article:
Bowling Green State University Facts for Kids. Kiddle Encyclopedia.