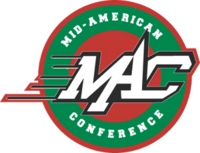 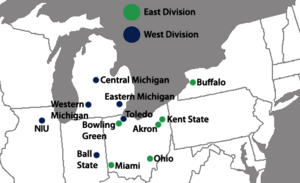 Locations of the full members of the Mid-American Conference.

The Mid-American Conference (MAC) is a college sports conference whose full members are located in the Great Lakes region of the United States. It sponsors 11 men's sports and 12 women's sports at the NCAA Division I level. In football, the MAC is one of 10 conferences that play in the top-level Football Bowl Subdivision (FBS).

The MAC was founded in 1946 by five schools in Indiana, Michigan, and Ohio, but only one of the founding members, Ohio University, is still in the conference. All but two of its current full members are in those three states.

Currently, the MVC has 12 full members, all public schools, each of which competes in at least 15 MAC sports. Every member of the conference competes in football, baseball, men's and women's basketball, and the following women's sports: cross country, soccer, softball, indoor and outdoor track and field, and volleyball. In many sports, the conference is split into East and West Divisions.

Another school will join the MAC in a single sport in July 2017.

All content from Kiddle encyclopedia articles (including the article images and facts) can be freely used under Attribution-ShareAlike license, unless stated otherwise. Cite this article:
Mid-American Conference Facts for Kids. Kiddle Encyclopedia.