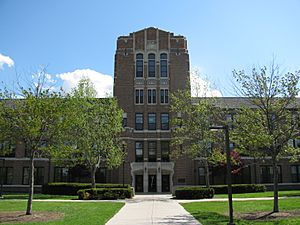 Warriner Hall which is on the campus.

Central Michigan University is a public, coeducational university in Mount Pleasant, Michigan. The university has about 28,389 students. It was founded in 1892. The current president of the university is George E. Ross.

The athletics teams of the university are called the Chippewas. They have 16 varsity teams, all but one of which competes in the Mid-American Conference (MAC). The only exception is the women's lacrosse team. Because CMU is the only MAC member that plays women's lacrosse, that team plays in the Atlantic Sun Conference.

All content from Kiddle encyclopedia articles (including the article images and facts) can be freely used under Attribution-ShareAlike license, unless stated otherwise. Cite this article:
Central Michigan University Facts for Kids. Kiddle Encyclopedia.