Southfield is a city in Oakland County of the US state of Michigan. It is a northern suburb of Detroit, MI. As of the 2010 census, the city had a population of 71,739. A part of Metro Detroit's upscale office market, the city's marque is a cluster of five golden skyscrapers – known as the "Golden Triangle" – that form the contemporary 2,200,000 square feet (204,400 m2) Southfield Town Center office complex with a Westin Hotel and a conference center. In addition, a 33-story luxury residential high-rise is separate from the complex. To the west, near the confluence of I-696/Reuther Freeway and M-10/Lodge Freeway, is the American Center.

Southfield was surveyed in 1817 according to the plan by Michigan territorial governor Lewis Cass. The first settlers came from nearby Birmingham and Royal Oak, Michigan, as well as the states of New York and Vermont. The area that would become Southfield was settled by John Daniels in 1823. Among the founders were the Heth, Stephens, Harmon, McClelland and Thompson families. Town 1 north, 10 east was first organized as Ossewa Township on July 12, 1830, but the name was changed just seventeen days later to Southfield Township. The township took its name from its location in the "south fields" of Bloomfield Township. A post office was established in 1833 and the first town hall built in 1873. The Southfield Fire Department was formed on April 6, 1942, and the Southfield Police Department in 1953.

In the 1950s, cities and villages began to incorporate within the township, including Lathrup Village in 1950, and Beverly Hills in 1957. Most of what was left of the township was formally incorporated as a city on April 28, 1958 to protect it from annexation attempts by the city of Detroit, whose expanding African American community was perceived as a threat by whites who fled to overwhelmingly white suburbs like Southfield as a part of segregationist white flight. (definition, origin of phrase required for better understanding)

The current city hall was built in 1964 as part of the new Civic Center complex, which also became home to Southfield's police headquarters. The Civic Center was expanded in 1971 to include a sports arena with swimming pool. Evergreen Hills Golf Course was added in 1972, and in 1978, a new public safety building, the Southfield Pavilion and a new court building were added. In 2003, an expanded and redesigned Southfield Public Library opened to the public on the Civic Center grounds, featuring state-of-the-art facilities. Outside the Civic Center complex, Southfield also has municipal parks and recreation facilities, which were largely developed in the 1970s, including Beech Woods Recreation Center and John Grace Community Center. Duns Scotus College is now the home of Word of Faith Christian Center.

According to the United States Census Bureau, the city has a total area of 26.28 square miles (68.06 km2), of which, 26.27 square miles (68.04 km2) is land and 0.01 square miles (0.03 km2) is water. The main branch of the River Rouge runs through Southfield. The city is bounded to the south by Eight Mile Road, its western border is Inkster Road, and to the east it is bounded by Greenfield Road. Southfield's northern border does not follow a single road, but lies approximately around Thirteen Mile Road. The city is bordered by Detroit and Redford Township to the south, Farmington Hills to the west, Franklin, Bingham Farms, and Beverly Hills to the north and Royal Oak, Berkley and Oak Park to the east. The separate city of Lathrup Village sits as an enclave in the eastern part of the city, completely surrounded by Southfield.

There were 31,778 households of which 26.7% had children under the age of 18 living with them, 33.5% were married couples living together, 19.4% had a female householder with no husband present, 4.4% had a male householder with no wife present, and 42.8% were non-families. 37.9% of all households were made up of individuals and 13.7% had someone living alone who was 65 years of age or older. The average household size was 2.22 and the average family size was 2.96.

The most prevalent occupations for people in Southfield are a mix of both white- and blue-collar jobs. Overall, Southfield is a city of sales and office workers, professionals and managers. There is a relatively large number of people living in Southfield who work in office and administrative support (16.00%), sales jobs (10.93%) and management occupations (9.72%). The population of Southfield is very well educated relative to most cities and towns in the nation, where the average community has 21.84% of its adult population holding a 4-year degree or higher: 38.73% of adults in Southfield have a bachelor's degree or even advanced degree. The per capita income in Southfield in 2010 was $28,995. "

See also: History of the African-Americans in Metro Detroit

In 2002 Southfield had 42,259 black people, giving it the second largest black population in Metro Detroit and third largest in the state of Michigan.

As of 2011 many African-Americans from Detroit are moving into Southfield and other Oakland and Macomb county communities. Tensions have occurred between existing middle class blacks in Southfield and newcomers from Wayne County. 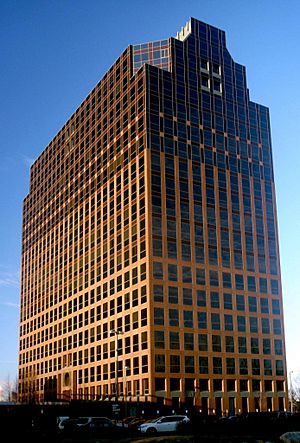 The major thoroughfares in the city include the John C. Lodge Freeway (M-10), which is among the first urban to suburban highways constructed in the United States. The city also contains I-696, Southfield Freeway (M-39), and US 24 (Telegraph Road). The city contains several freeway interchanges connecting local roads to the freeways. Most prominently, "The Lodge" freeway connects downtown Detroit to "The Mixing Bowl," the sprawling interchange of I-696, US 24, M-10, Lahser Road, and Franklin Road, all of which are located in Southfield.

At one time the Japan Festival was held in Southfield.

All content from Kiddle encyclopedia articles (including the article images and facts) can be freely used under Attribution-ShareAlike license, unless stated otherwise. Cite this article:
Southfield, Michigan Facts for Kids. Kiddle Encyclopedia.