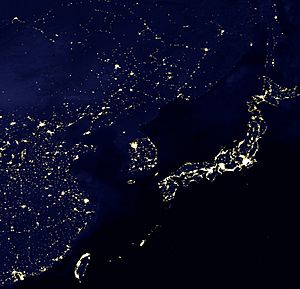 A satellite view of East Asia at night shows urbanization as illumination. Here the Taiheiyō Belt, which includes Tokyo, demonstrates how megalopolises can be identified by nighttime lighting.

A city is a large and permanent human settlement. Cities generally have extensive systems for housing, transportation, sanitation, utilities, land use, and communication. Their density facilitates interaction between people and businesses, sometimes benefiting both parties in the process.

Historically city-dwellers have been a small proportion of humanity overall, but today, following two centuries of unprecedented and rapid urbanization, half of the world population is said to live in cities. Present-day cities usually form the core of larger metropolitan areas and urban areas, creating numerous commuters traveling towards city centers for employment, entertainment, and edification.

Some things that make a city are: 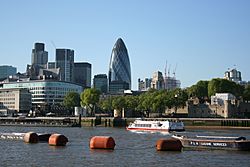 The River Thames is part of London's transport system. This picture shows the "City of London".

Tokyo, is the world's most populous metropolitan area.

The sizes of cities can be very different. This depends on the type of city that it is. Cities that were built hundreds of years ago and which have not changed much, are very much smaller than modern cities. There are two main reasons. One reason is that old cities often have a city wall, and most of the city is inside it. Another important reason is that the streets in old cities are often narrow. If the city got too big, it was hard for a cart carrying food to get to the market place. People in cities need food, and the food always has to come from outside the city. Cities that were on a river like London could grow much bigger than cities that were on a mountain like Sienna in Italy, because the river made a transport route for carrying food and other goods, as well as for transporting people. London has been changing continually for hundreds of years, while Siena, which was a very important city in the 1300s has changed very little in 700 years. Modern cities with modern transport systems can grow very large, because the streets are wide enough for cars, buses and trucks, and there are often railway lines as well.

In the US, the word city is often used for towns that are not very big. When the first European people went to America, they gave the name "city" to new places. They hoped the places would be great cities in the future. For example, Salt Lake City was the name given to a village of 148 people. When they started building the town they made street plans and called it Great Salt Lake City (for the nearby Great Salt Lake). Now, 150 years later, it really is a big city.

In modern times many cities have grown bigger and bigger. The whole area is often called a "metropolis" and can sometimes includes several small ancient towns and villages. The metropolis of London includes the City of London, the City of Westminster and many old villages such as Notting Hill, Southwark, Richmond, Greenwich and etc. The part that is officially known as the "City of London" only takes up one square mile. The rest is known as "Greater London". Many other cities have grown in the same way.

These giant cities can be exciting places to live, and many people can find good jobs there, but modern cities also have many problems. Many people cannot find jobs in the cities and have to get money by begging or by crime. Cars, factories, and waste create a lot of pollution that makes people sick. the smallest city is Urban history

Carcassonne is an ancient city in France.

Urban History is history of civilization. The first cities were made in ancient times, as soon as people began to create civilization. Famous ancient cities which fell to ruins included Babylon, Troy, Mycenae and Mohenjo Daro.

Benares in northern India is one among the ancient cities which has a history of more 3000 years. Other cities that have existed since ancient times are Athens in Greece, Rome and Volterra in Italy, Alexandria in Egypt and York in England.

In Europe, in the Middle Ages, being a city was a special privilege, granted by nobility. Cities that fall into this category, usually had (or still have) city walls. The people who lived in the city were privileged over those who did not. Medieval cities that still have walls include Carcassonne in France, Tehran in Iran, Toledo in Spain and Canterbury in England. 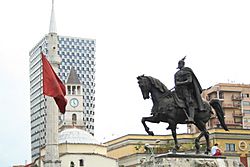 In the United Kingdom, a city is a town which people have always called a city, or which has got the name "city" status by royal charter (a special paper from the king or queen). Cities usually get this because they have a special number of people or are important. In the past, cities got that name if they had a cathedral or a university. Some cathedral cities, for example St David's, are small, and people do not normally think of them as cities. Cities that became cities because of their university generally grow because more people move there to be educated at the university colleges. The university cities of Oxford and Cambridge are famous throughout the world. The largest city is Shanghai, while the fastest growing is Dubai. The smallest city in the UK is Wells. 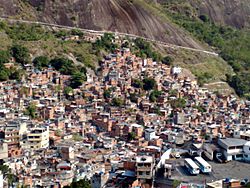 In Rio de Janeiro, a city famous for its beauty, large slums lie between the richest districts. Many of the world's large cities have areas of poverty like this.

These cities have more than 10 million people:

All content from Kiddle encyclopedia articles (including the article images and facts) can be freely used under Attribution-ShareAlike license, unless stated otherwise. Cite this article:
City Facts for Kids. Kiddle Encyclopedia.