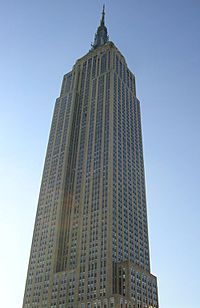 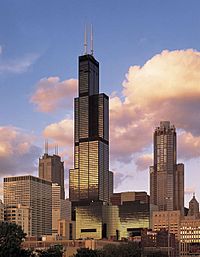 A skyscraper is a very tall high-rise building, usually more than 152 metres (500 feet) in height. Most skyscrapers are built in urban areas such as cities, and they are very common in the central business district (also called downtown) areas of many large cities including New York City, Chicago, London, Paris, Sydney, Beijing, Berlin, Toronto, Moscow, Hong Kong and Tokyo.

Originally, the word skyscraper meant a tall sail on a sailing ship. Over time, the word's meaning has changed, and today it means a tall building. Until the nineteenth century, buildings taller than six stories tall were not common. Tall buildings made of weak materials would fall down. In addition, people did not like walking up many steps and running water could only be brought up to fifty feet (15m) high.

Better technology helped make skyscrapers more common. Stronger building materials such as steel and reinforced concrete were developed, so stronger buildings could be made. Water pumps brought water up to heights above fifty feet.

The first building to be considered a skyscraper, the Home Insurance Building, was built in Chicago, Illinois in the United States, and was designed by William LeBaron Jenney. The building, ten stories high, was built from 1884 to 1885. It was destroyed in 1931 because they wanted to build another building in its previous place.

In the same year the Home Insurance Building was destroyed, one of the oldest and most famous skyscrapers, the Empire State Building, opened in New York City. Later in the 20th century, people started building skyscrapers in cities that did not have many tall buildings in the past. In 1973, the then-called Sears Tower in Chicago was finished and became the world's tallest building until the late 1990s. It took the record from the World Trade Center in New York City, which opened in 1970 but was destroyed in the September 11, 2001 attacks.

Many taller buildings have been built since then, including Taipei 101 in Taipei. This building was the world's tallest from 2004 until 2008, when the Burj Khalifa in Dubai opened. Burj Khalifa is at this time the tallest building and man-made structure ever made, but the Jeddah Tower in Jeddah, which is still being built, will be even taller.

All content from Kiddle encyclopedia articles (including the article images and facts) can be freely used under Attribution-ShareAlike license, unless stated otherwise. Cite this article:
Skyscraper Facts for Kids. Kiddle Encyclopedia.