Jeddah (sometimes spelled Jiddah or Jedda; is a city in the Hijaz Tihamah region on the coast of the Red Sea and is the major urban center of western Saudi Arabia. It is the largest city in Makkah Province, the largest sea port on the Red Sea, and with a population of about 4 million people (as of 2017[update]), the second-largest city in Saudi Arabia after the capital city, Riyadh. Jeddah is Saudi Arabia's commercial capital.

Jeddah is the principal gateway to Mecca and Medina, two of the holiest cities in Islam and popular tourist attractions.

Economically, Jeddah is focusing on further developing capital investment in scientific and engineering leadership within Saudi Arabia, and the Middle East. Jeddah was independently ranked fourth in the Africa – Mid-East region in terms of innovation in 2009 in the Innovation Cities Index.

Jeddah is one of Saudi Arabia's primary resort cities and was named a Beta world city by the Globalization and World Cities Study Group and Network (GaWC). Given the city's close proximity to the Red Sea, fishing and seafood dominates the food culture unlike other parts of the country. In Arabic, the city's motto is "Jeddah Ghair," which translates to "Jeddah is different." The motto has been widely used among both locals as well as foreign visitors. The city had been previously perceived as the "most open" city in Saudi Arabia.

Some archaeologists' studies suggest the existence of inhabitants in the region now known as Jeddah since the Stone Age seeing as they found some artifacts and writings in Wadi (valley) Breiman east of Jeddah and Wadi Boib northeast of Jeddah. Some historians trace its founding a tribe who inhabited it in 115 BC. According to some accounts, the history of Jeddah dates back to early times before Alexander the Great, who visited the city between 323 and 356 BC. Excavations in the old city suggest that Jeddah was founded as a fishing hamlet in 522 BC. 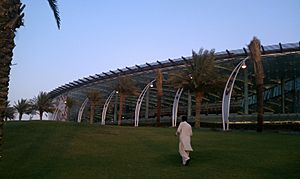 Mall of Arabia is the largest shopping mall in Jeddah

Jeddah has long been a port city. Even before being designated the port city for Mecca, Jeddah was a trading hub for the region. In the 19th century, goods such as mother-of-pearl, tortoise shells, frankincense, and spices were routinely exported from the city. Apart from this, many imports into the city were destined for further transit to the Suez, Africa, or Europe. Many goods passing through Jeddah could not even be found in the city or even in Arabia.

King Abdullah Street is one of the most important streets in Jeddah and runs from King Fahd Road by the waterfront in the west of Jeddah to the eastern end of the city. It is famous for hosting numerous corporate offices and commercial developments, it also has the tallest Flagpole in the world at a height of 170 m (558 ft).

Tahaliyah Street is an important fashion and shopping street in central Jeddah. It contains many upscale department stores and boutiques. It has been renamed "Prince Mohammad bin Abdul Aziz Road" by the government, but this official name is not widely used. It is also the most luxurious street in Jeddah as it has super cars such as lambos, ferrari, and mclarens.

Madina Road is one of the most important streets in Jeddah. It links the South districts with the North, and it contains most of the companies main offices and showrooms. And it is the road to King AbdulAziz Airport.

All content from Kiddle encyclopedia articles (including the article images and facts) can be freely used under Attribution-ShareAlike license, unless stated otherwise. Cite this article:
Jeddah Facts for Kids. Kiddle Encyclopedia.