Kabsa is a family of mixed rice dishes that originates from Saudi Arabia where it is commonly regarded as the national dish.

The dish is made with rice and meat. It can often be found served in countries such as Qatar, Oman, the United Arab Emirates, Bahrain and Kuwait. The dish is also popularly known as makbūs in most Arab states of the Persian Gulf, but is served in the same way.

The name comes from the Arabic word "kbs" which literally means "press", referring to the technique used in the cooking, where the ingredients are all cooked (or pressed) in one pot.

These dishes are usually made with rice (usually long-grain, almost always basmati), meat, vegetables, and a mixture of spices. There are many kinds of kabsa and each kind has a uniqueness about it. Pre-mixed kabsa spices are now available under several brand names. These reduce preparation time, but may have a flavor distinct from traditional kabsa. The spices used in kabsa are largely responsible for its taste; these are generally black pepper, cloves, cardamom, saffron, cinnamon, black lime, bay leaves and nutmeg.

The main ingredient that accompanies the spices is the meat. The meats used are usually chicken, goat, lamb, camel, beef, fish or shrimp. In chicken machbūs, a whole chicken is used. The spices, rice and meat may be mixed with almonds, pine nuts, peanuts, onions and sultanas. The dish can be served hot with daqqūs, which is a home-made Arabic tomato sauce. 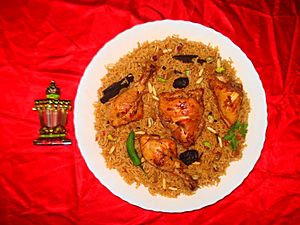 Kabsa is also known as machbūs in the Persian Gulf region

Meat for kabsa can be cooked in various ways. A popular way of preparing meat is called mandi. This is an ancient technique that originates in Yemen, whereby meat is barbecued in a deep hole in the ground that is covered while the meat cooks. Another way of preparing and serving meat for kabsa is mathbi, where seasoned meat is grilled on flat stones that are placed on top of burning embers. A third technique, madghūt, involves cooking the meat in a pressure cooker.

All content from Kiddle encyclopedia articles (including the article images and facts) can be freely used under Attribution-ShareAlike license, unless stated otherwise. Cite this article:
Kabsa Facts for Kids. Kiddle Encyclopedia.