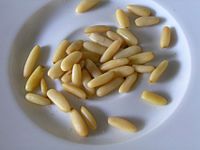 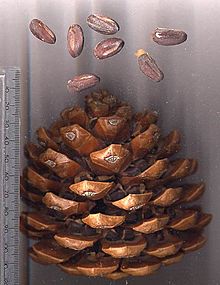 Pine nuts are the edible seeds of pines (family Pinaceae, genus Pinus). About 20 species of pine produce seeds large enough to be worth harvesting. Other pines have edible seeds too small to be useful as a human food.

Pine nuts have been eaten in Europe and Asia since the Paleolithic period. They are often added to meat, fish, salads and vegetable dishes or baked into bread. In Italian they are called pinoli. They are an essential part of Italian pesto sauce.

Pine nuts can be pressed to extract pine nut oil, which is valued for its mild, nutty flavour. The large edible seeds of the Southern Hemisphere conifer genus Araucaria produce nuts rather like pine nuts. 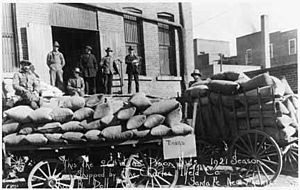 When first extracted from the pine cone, they are covered with a hard shell (seed coat), thin in some species, thick in others. The nutrition is stored in the embryo (sporophyte) in the centre. Although a nut in the culinary sense, in the botanical sense pine nuts are seeds; being a gymnosperm, they lack a carpel (fruit) outside.

The shell must be removed before the pine nut can be eaten. Unshelled pine nuts have a long shelf life if kept dry and refrigerated (−5 °C (23 °F) to 2 °C (36 °F)); shelled nuts (and unshelled nuts in warm conditions) deteriorate rapidly, becoming rancid within a few weeks or even days in warm humid conditions. Pine nuts are commercially available in shelled form, but due to poor storage, can have poor flavor and may be already rancid at the time of purchase. Consequently, pine nuts are often frozen to preserve their flavor.

European pine nuts may be distinguished from Asian ones by their greater length in comparison to girth; Asian pine nuts are stubbier, shaped somewhat like long kernels of corn. The American piñon nuts are known for their large size and ease of shelling. In the United States, P. edulis, the hard shell of New Mexico and Colorado, became a sought-after species due to the trading post system, and the Navajo people who used the nuts as a means of commerce. The Italian pine nut (P. pinea) was brought to the United States by immigrants, and became a favored treat along the East Coast in the early 1930s, when bumper crops of American pine nuts were readily available at low prices. 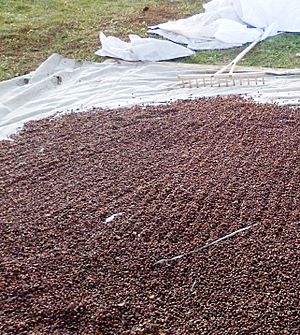 Pine nuts have been eaten in Europe and Asia since the Paleolithic period. They are frequently added to meat, fish, salads and vegetable dishes or baked into bread.

In Italian they are called pinoli (in the US they are often called pignoli, but in Italy pignolo is actually a word far more commonly used to describe a fussy, overly fastidious or extremely meticulous person) and are an essential component of Italian pesto sauce; the upsurge in the popularity of this sauce since the 1990s has increased the visibility of the nut in America, primarily on the West Coast. Torta della nonna (literally "granny's cake") is a generic Italian dish name that in most families indicates an old family recipe for any kind of cake but often is used for a tart or a pie filled with custard, topped with pine nuts and optionally dusted with icing sugar. Pignoli cookies, an Italian American specialty confection (in Italy these would be called biscotti ai pinoli), are made of almond flour formed into a dough similar to that of a macaroon and then topped with pine nuts.

In Catalonia, a sweet is made of small marzipan balls covered with pine nuts, painted with egg and lightly cooked, and those are called "Panellets". Pine nuts are also featured in the salade landaise of southwestern France. The Nevada, or Great Basin, pine nut has a sweet fruity flavor and is promoted for its large size, sweet flavor and ease of peeling. Pine nuts are also widely used in Middle Eastern cuisine, reflected in a diverse range of dishes such as kibbeh, sambusak, and fatayer, desserts such as baklava, and many others.

Throughout Europe and Middle East the pine nuts used are traditionally from Pinus pinea (stone pine). They are easily distinguished from the Asian pine nuts by their more slender shape and more homogeneous flesh. Because of the lower price, Asian pine nuts are also often used, especially in cheaper preparations. Pine nuts contain thiamine (vitamin B1) and protein.

Pine nut coffee, known as piñón (Spanish for pine nut), is a specialty found in the southwest United States, especially New Mexico, and is typically a dark roast coffee having a deep, nutty flavor; roasted and lightly salted pine nuts can often be found sold on the side of the road in cities across New Mexico to be used for this purpose, as well as a snack.

Pine nut oil is added to foods for flavor.

All content from Kiddle encyclopedia articles (including the article images and facts) can be freely used under Attribution-ShareAlike license, unless stated otherwise. Cite this article:
Pine nut Facts for Kids. Kiddle Encyclopedia.