Pesto is a kind of sauce that originated in Liguria, in Italy. The uncooked sauce is made of basil which is crushed. Other ingredients are garlic, salt, pine nuts and certain kinds of cheese (most often Parmesan cheese, Pecorino Sardo or Pecorino Romano).

Pesto is often used as a sauce for pasta.

There is a similar dish in the Provence, in France. It contains no nuts or cheese. It is called Pistou.

Pesto is traditionally prepared in a marble mortar with a wooden pestle. First, garlic and pine nuts are placed in the mortar and reduced to a cream, and then the washed and dried basil leaves are added with coarse salt and ground to a creamy consistency. Only then is a mix of Parmigiano-Reggiano and Pecorino added. To help incorporate the cheese a little extra-virgin olive oil is added. In a tight jar (or simply in an air-tight plastic container), covered by a layer of extra-virgin olive oil, pesto can last in the refrigerator up to a week, and can be frozen for later use. 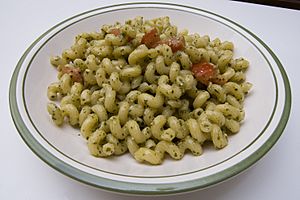 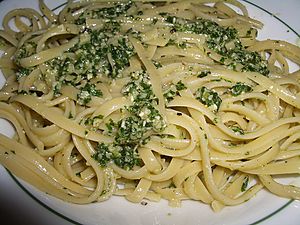 Pesto is commonly used on pasta, traditionally with mandilli de sæa ("silk handkerchiefs" in the Genoese dialect), trofie or trenette. Potatoes and string beans are also traditionally added to the dish, boiled in the same pot in which the pasta has been cooked. Pasta, mixed with pesto, has become a well-known dish in many countries today, with countless recipes being posted online for "pesto pasta".

It is used in Genoese minestrone. Outside of Italy, pesto is sometimes served with sliced beef, tomatoes, and sliced boiled potatoes. 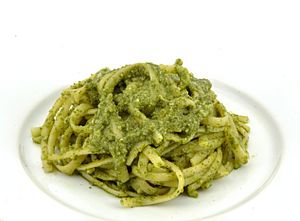 All content from Kiddle encyclopedia articles (including the article images and facts) can be freely used under Attribution-ShareAlike license, unless stated otherwise. Cite this article:
Pesto Facts for Kids. Kiddle Encyclopedia.