Garlic (scientific name Allium sativum) is a species in the onion genus, Allium.

Its close relatives include the onion, shallot, leek, chive, and Chinese onion. With a history of several thousand years of human consumption and use, garlic is native to Central Asia and northeastern Iran, and has long been a common seasoning worldwide. It was known to Ancient Egyptians, and has been used both as a food flavoring and as a traditional medicine.

Allium sativum is a bulbous plant. It grows up to 1.2 m (4 ft) in height. Its hardiness is USDA Zone 8. It produces hermaphrodite flowers. It is pollinated by bees and other insects.

Allium sativum grows in the wild in areas where it has become naturalized. The "wild garlic", "crow garlic", and "field garlic" of Britain are members of the species Allium ursinum, Allium vineale, and Allium oleraceum, respectively. Identification of the wild progenitor of common garlic is difficult, due to the sterility of its many cultivars which may all be descended from the species Allium longicuspis, which grows wild in central and southwestern Asia. 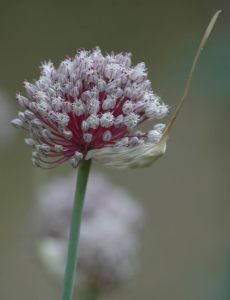 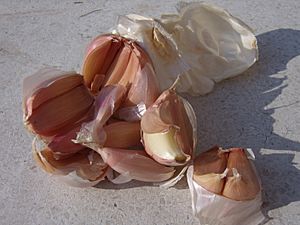 There are a number of garlics with Protected Geographical Status in Europe.

Garlic is easy to grow and can be grown year-round in mild climates. While sexual propagation of garlic is possible, nearly all of the garlic in cultivation is propagated asexually, by planting individual cloves in the ground. In colder climates, cloves are planted in the autumn, about six weeks before the soil freezes, and harvested in late spring or early summer. The cloves must be planted deep enough to prevent freeze/thaw, which causes mold or white rot.

Garlic plants can be grown closely together, leaving enough space for the bulbs to mature, and are easily grown in containers of sufficient depth. Garlic does well in loose, dry, well-drained soils in sunny locations, and is hardy throughout USDA climate zones 4–9. When selecting garlic for planting, it is important to pick large bulbs from which to separate cloves. Large cloves, along with proper spacing in the planting bed, will also improve bulb size. Garlic plants prefer to grow in a soil with a high organic material content, but are capable of growing in a wide range of soil conditions and pH levels.

Garlic scapes are removed to focus all the garlic's energy into bulb growth. The scapes can be eaten raw or cooked.

Garlic plants are usually hardy and not affected by many pests or diseases. Garlic plants are said to repel rabbits and moles. However, pathogens that affect garlic are nematodes and wood-decay fungus, which remain in the soil indefinitely after the ground has become infected. Garlic may also suffer from pink root, a typically non-fatal disease that stunts the roots and turns them pink or red, leek rot or downy mildew. The larvae of the leek moth attack garlic by mining into the leaves or bulbs. 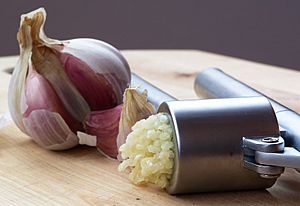 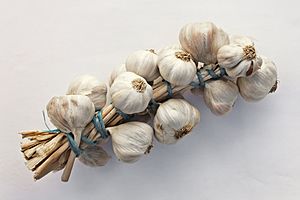 Garlic is widely used around the world for its pungent flavor as a seasoning or condiment.

The garlic plant's bulb is the most commonly used part of the plant. With the exception of the single clove types, garlic bulbs are normally divided into numerous fleshy sections called cloves. Garlic cloves are used for consumption (raw or cooked) or for medicinal purposes. They have a characteristic pungent, spicy flavor that mellows and sweetens considerably with cooking.

Other parts of the garlic plant are also edible. The leaves and flowers (bulbils) on the head (spathe) are sometimes eaten. They are milder in flavor than the bulbs, and are most often consumed while immature and still tender. Immature garlic is sometimes pulled, rather like a scallion, and sold as "green garlic". When green garlic is allowed to grow past the "scallion" stage, but not permitted to fully mature, it may produce a garlic "round", a bulb like a boiling onion, but not separated into cloves like a mature bulb. It imparts a garlic flavor and aroma in food, minus the spiciness. Green garlic is often chopped and stir-fried or cooked in soup or hotpot in Southeast Asian (i.e. Vietnamese, Thai, Lao, Cambodian, Singaporean) and Chinese cookery, and is very abundant and low-priced. Additionally, the immature flower stalks (scapes) of the hardneck and elephant types are sometimes marketed for uses similar to asparagus in stir-fries.

Inedible or rarely eaten parts of the garlic plant include the "skin" covering each clove and root cluster. The papery, protective layers of "skin" over various parts of the plant are generally discarded during preparation for most culinary uses, though in Korea immature whole heads are sometimes prepared with the tender skins intact. The root cluster attached to the basal plate of the bulb is the only part not typically considered palatable in any form. An alternative is to cut the top off the bulb, coat the cloves by dribbling olive oil (or other oil-based seasoning) over them, and roast them in an oven. Garlic softens and can be extracted from the cloves by squeezing the (root) end of the bulb, or individually by squeezing one end of the clove. In Korea, heads of garlic are heated over the course of several weeks; the resulting product, called black garlic, is sweet and syrupy, and is now being sold in the United States, United Kingdom and Australia.

Garlic may be applied to different kinds of bread, usually in a medium of butter or oil, to create a variety of classic dishes, such as garlic bread, garlic toast, bruschetta, crostini and canapé. The flavor varies in intensity and aroma with the different cooking methods. It is often paired with onion, tomato, or ginger.

Immature scapes are tender and edible. They are also known as "garlic spears", "stems", or "tops". Scapes generally have a milder taste than the cloves. They are often used in stir frying or braised like asparagus. Garlic leaves are a popular vegetable in many parts of Asia. The leaves are cut, cleaned, and then stir-fried with eggs, meat, or vegetables. 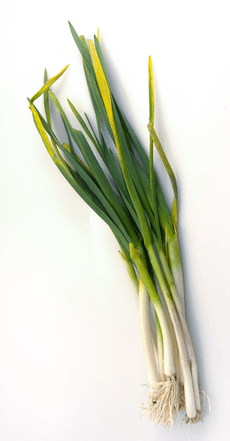 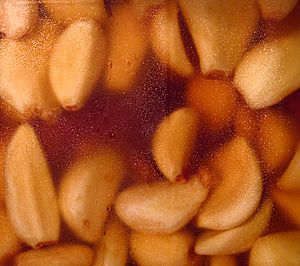 Garlic cloves pickled by simply storing them in vinegar in a refrigerator. This also yields garlic-infused vinegar to use in recipes or as a condiment.

Garlic is a fundamental component in many or most dishes of various regions, including eastern Asia, South Asia, Southeast Asia, the Middle East, northern Africa, southern Europe, and parts of Latin America. Latin American seasonings, particularly, use garlic in sofritos and mofongos.

Oils can be flavored with garlic cloves. These infused oils are used to season all categories of vegetables, meats, breads and pasta. Garlic, along with fish sauce, chopped fresh chilis, lime juice, sugar and water, is a basic essential item in dipping fish sauce, a highly used dipping sauce condiment used in Indochina. In East and Southeast Asia, chili oil with garlic is a popular dipping sauce, especially for meat and seafood. Tuong ot toi Viet Nam (Vietnam Chili Garlic Sauce) is a highly popular condiment and dip across North America and Asia.

In some cuisines, the young bulbs are pickled for three to six weeks in a mixture of sugar, salt, and spices. In eastern Europe, the shoots are pickled and eaten as an appetizer. Laba garlic, prepared by soaking garlic in vinegar, is a type of pickled garlic served with dumplings in northern China to celebrate the Chinese New Year.

Garlic is essential in Middle Eastern and Arabic cooking, with its presence in many food items. In Levantine countries such as Jordan, Palestine, and Lebanon, garlic is traditionally crushed together with olive oil, and occasionally salt, to create a Middle Eastern garlic sauce called Toum (تُوم; meaning "garlic" in Arabic). While not exclusively served with meats, toum is commonly paired with chicken, or other meat dishes such as shawarma. Garlic is also a key component in hummus, a Arabic dip composed of chickpeas, tahini, garlic, lemon juice, and salt.

Lightly smoked garlic is used in British and European cuisine. It is particularly prized for stuffing poultry and game, and in soups and stews.

All content from Kiddle encyclopedia articles (including the article images and facts) can be freely used under Attribution-ShareAlike license, unless stated otherwise. Cite this article:
Garlic Facts for Kids. Kiddle Encyclopedia.