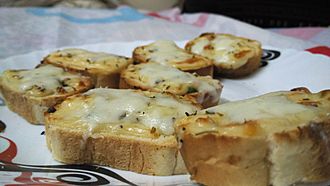 Garlic bread (also called garlic toast) consists of bread (usually a baguette or sour dough like a ciabatta), topped with garlic and olive oil or butter and may include additional herbs, such as oregano or chives. It is then either grilled or broiled until toasted or baked in a conventional or bread oven.

It is typically made using a French baguette, or sometimes a sourdough like ciabatta which is partially sliced downwards, allowing the condiments to soak into the loaf while keeping it in one piece. The bread is then stuffed through the cuts with oil and minced garlic before baking. Alternatively, butter and garlic powder are used, or the bread is cut lengthwise into separate slices which are individually garnished.

Some variants are topped with a variety of cheeses, often mozzarella, parmesan, cheddar or feta. Some restaurants use clarified butter in place of olive oil.

Garlic bread stems from bruschetta, which appeared in Italy around the 15th century, and can be traced back to Ancient Rome.

Garlic bread is widely popular across Europe, and is available in many different food shops and restaurants.

In the United States garlic bread has been on the menu of many restaurants since at least the 1950s, often paired with pasta dishes, particularly lasagna and spaghetti. Commercially manufactured frozen garlic bread was developed in the 1970s by Cole's Quality Foods in Muskegon, Michigan.

All content from Kiddle encyclopedia articles (including the article images and facts) can be freely used under Attribution-ShareAlike license, unless stated otherwise. Cite this article:
Garlic bread Facts for Kids. Kiddle Encyclopedia.