Oregano or Pot Marjoram (Origanum vulgare) is a species of Origanum. It is native to Europe, the Mediterranean region and southern and central Asia. It is a perennial herb. It can grow to 20–80 cm tall. Its leaves are opposite each other. They are 1–4 cm long. The flowers are purple. They can grow 3–4 mm long. The name of the plant comes from the Greek origanon [ὀρίγανον]: oros [ὄρος] “mountain” + the verb ganousthai [γανοῦσθαι] “delight in”. 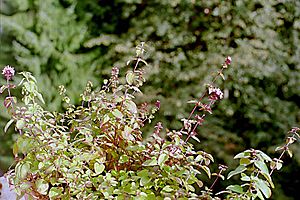 Oregano growing in a field.

The subspecies of oregano Origanum vulgare hirtum is an important herb. It is used for cooking, especially in Greek and Italian cuisines. The leaves are used for cooking.

Oregano is often used for tomato sauces, fried vegetables and grilled meat. Together with basil, it adds much to the special character of many Italian dishes.

Oregano is an ingredient needed for Greek cuisine. It adds flavour to the Greek salad. It can be used separately. It can also be added to the lemon-olive oil sauce that goes with almost every fish or meat barbecues and some casseroles.

Oregano has an aromatic, warm and slightly bitter taste. The taste varies in intensity; good quality is so strong that it almost numbs the tongue, but the cultivars adapted to colder climates have often unsatisfactory flavour. The influence of climate, season and soil on the composition of the essential oil is bigger than the difference between the various species.

The related species Origanum onites (Greece, Asia Minor) and O. heracleoticum (Italy, Balkan peninsula, West Asia) have similar flavours. A closely related plant is marjoram from Asia Minor. That plant has a completely different taste. This is because phenolic compounds are missing in its essential oil. Some breeds show a flavour intermediate between oregano and marjoram. The Oregano plant is also commonly found in the mediterranean region, and the black sea.

The dish most associated with oregano is pizza.

Oregano is high in antioxidant activity, because of a high content of phenolic acids and flavonoids. Both of these characteristics may be useful in both health and food preservation. In the Philippines, oregano (coleus aromaticus) is not commonly used for cooking but is rather considered as a primarily medicinal plant, useful for relieving children's coughs.

All content from Kiddle encyclopedia articles (including the article images and facts) can be freely used under Attribution-ShareAlike license, unless stated otherwise. Cite this article:
Oregano Facts for Kids. Kiddle Encyclopedia.