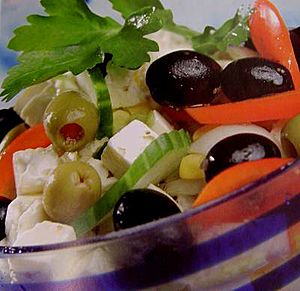 Greek salad (Greek: χωριάτικη σαλάτα), 'country/village salad', is a dish from Greece. It is commonly served as a part of a traditional Greek meal. It is one of the most popular salads in Greece and Cyprus. This is because it is light, refreshing and easy to make. It is especially popular during the summer months. True Greek salad is essentially a tomato salad made of sliced or chopped tomatoes with a few slices of cucumber, and red onion. It is usually seasoned with salt, black pepper, and oregano and dressed with olive oil. Common additions include feta cheese, bell peppers, capers, anchovies, sardines and kalamata olives. Lettuce and vinegar are not used in a Greek salad.

A lettuce salad (called μαρούλι, "lettuce") is a different salad. It is also popular, especially in the autumn and spring. It is made of finely sliced lettuce, scallions, and fresh dill, and dressed with salt, black pepper, olive oil and red wine vinegar or lemon juice. 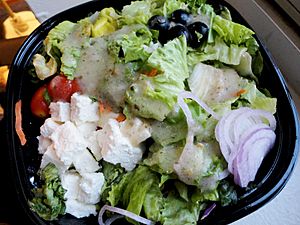 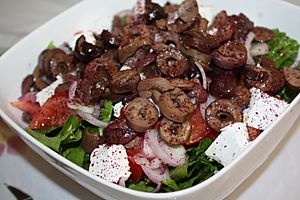 In North America, Australia, South Africa and the United Kingdom, Greek salad has a different meaning: It is a lettuce salad, with Greek-inspired ingredients. The dressing is usually vinegar and oil. Lettuce, tomatoes, feta, and olives are the most standard elements in an American "Greek" salad, but cucumbers, bell peppers, onions, radishes, dolmades, anchovies/sardines and pickled hot peppers are common. In the Detroit, Michigan area, for example, a "Greek salad" also includes beets. Rather than simple olive oil and vinegar, as in a μαρούλι - lettuce salad, prepared dressings containing various herbs and seasonings are frequently used. This style of "Greek salad" is rarely encountered in Greece except in the homes of American Greeks or restaurants that cater to tourists. In these countries, the true Greek salad, when encountered, may be called by the Greek term horiatiki—pronounced [hɔːriː'ætɪkiː]—or by such terms as "country salad", "peasant salad", or "village salad", to avoid confusion.

Various other salads have also been called "Greek" in the English language in the last century. Some of them have a very old connection to Greek cuisine. For example, one 1938 American recipe called for a mayonnaise-dressed lettuce salad with shredded cabbage, carrots, and diced smoked herring (rega/renga).

The salads of Greek cuisine are wide and varied. Each region of Greece has or has had a salad specific to the village or area. The most common, described above, start most meals today in Greece at home or when dining out. Others include:

All content from Kiddle encyclopedia articles (including the article images and facts) can be freely used under Attribution-ShareAlike license, unless stated otherwise. Cite this article:
Greek Salad Facts for Kids. Kiddle Encyclopedia.