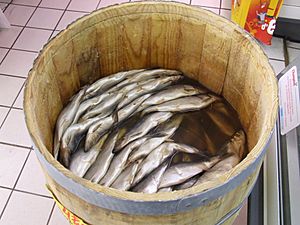 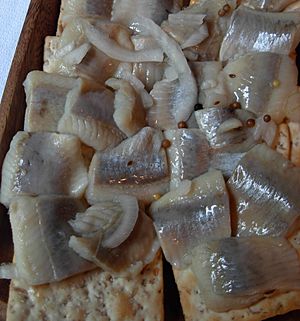 A herring is a small teleost fish of the genus Cluptea. Best-known of this family is probably the Atlantic Herring. There are 15 different species of herring. When herrings migrate in the water they usually do this in large numbers; this is then called a school of herring. Like other fish, they do this for protection: see shoaling and schooling.

Herrings can be eaten. They are often smoked or pickled.

A red herring is used to describe a plot device in mystery fiction that leads the reader to a wrong solution. 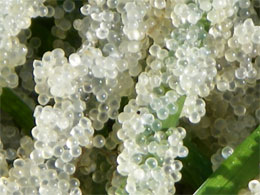 At least one stock of Atlantic herring spawns in every month of the year. Each spawns at a different time and place (spring, summer, autumn, and winter herrings). Greenland populations spawn in 0–5 m (0–16 ft) of water, while North Sea (bank) herrings spawn at down to 200 m (660 ft) in autumn. Eggs are laid on the sea bed, on rock, stones, gravel, sand or beds of algae. Females may deposit from 20,000 to 40,000 eggs, according to age and size, averaging about 30,000. In sexually mature herring, the genital organs grow before spawning, reaching about one-fifth of its total weight.

The eggs sink to the bottom, where they stick in layers or clumps to gravel, seaweed, or stones, by means of their mucous coating, or to any other objects on which they chance to settle.

If the egg layers are too thick they suffer from oxygen depletion and often die, entangled in a maze of mucus. They need substantial water microturbulence, generally provided by wave action or coastal currents. Survival is highest in crevices and behind solid structures, because predators feast on openly exposed eggs. The individual eggs are 1 to 1.4 mm (0.039 to 0.055 in) in diameter, depending on the size of the parent fish and also on the local race. Incubation time is about 40 days at 3 °C (37 °F), 15 days at 7 °C (45 °F), or 11 days at 10 °C (50 °F). Eggs die at temperatures above 19 °C (66 °F).

The larvae are 5 to 6 mm (0.20 to 0.24 in) long at hatching, with a small yolk sac that is absorbed by the time the larvae reach 10 mm (0.39 in). Only the eyes are well pigmented. The rest of the body is nearly transparent, virtually invisible under water and in natural lighting conditions.

The larvae are very slender and can easily be distinguished from all other young fish of their range by the location of the vent, which lies close to the base of the tail, but distinguishing clupeoids one from another in their early stages requires critical examination, especially telling herring from sprats. 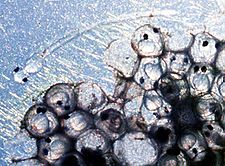 Transparent eggs with the yolk and eyes visible and one larva hatched. 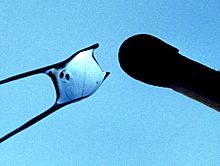 Freshly hatched larva in a drop of water besides a match to demonstrate how tiny it is: The black eyes and the yolk are visible. 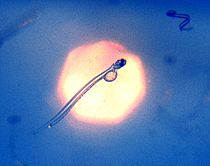 Young larva in typical oblique swimming position, with remaining yolk still attached: Another larva at the upper right is in the classical S-shape of the beginning phase of attacking a copepod. 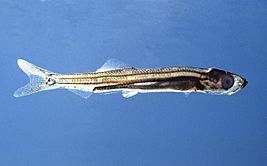 Still transparent juvenile herring, about 38 mm long and 3 months old: Visible are the otoliths, the gut, the silvery swimbladder, and the heart.

Herrings are a prominent converter of zooplankton into fish, consuming copepods, arrow worms, pelagic amphipods, mysids, and krill in the pelagic zone. Conversely, they are a central prey item or forage fish for higher trophic levels. The reasons for this success is still enigmatic; one speculation attributes their dominance to the huge, extremely fast cruising schools they inhabit. 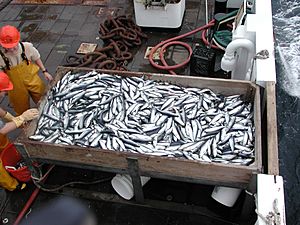 Adult herring are harvested for their flesh and eggs, and they are often used as baitfish. The trade in herring is an important sector of many national economies. In Europe, the fish has been called the "silver of the sea", and its trade has been so significant to many countries that it has been regarded as the most commercially important fishery in history.

Environmental Defense have suggested that the Atlantic herring (Clupea harengus) fishery is an environmentally responsible fishery.

All content from Kiddle encyclopedia articles (including the article images and facts) can be freely used under Attribution-ShareAlike license, unless stated otherwise. Cite this article:
Herring Facts for Kids. Kiddle Encyclopedia.