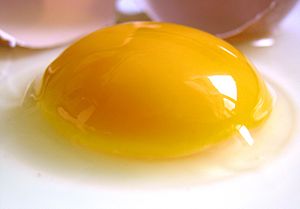 The egg yolk is the yellow center of an egg. It is only one cell. It is commonly seen in fried eggs. When it is mixed with the whites, it makes scrambled eggs. It is sometimes used in cooking. It is much higher in calories than the egg white. It has Vitamin D in it. Some eggs have two egg yolks in them.

All content from Kiddle encyclopedia articles (including the article images and facts) can be freely used under Attribution-ShareAlike license, unless stated otherwise. Cite this article:
Egg yolk Facts for Kids. Kiddle Encyclopedia.