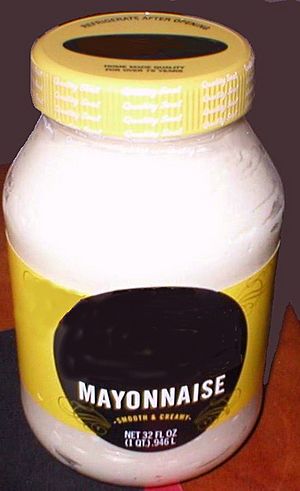 A jar of mayonnaise

Mayonnaise, informally mayo, is a thick cold sauce or dressing usually used in sandwiches and composed salads. It is a stable emulsion of oil, egg yolk, and acid, either vinegar or lemon juice. There are many variants using additional flavorings. The proteins and lecithin in the egg yolk serve as emulsifiers in mayonnaise (and hollandaise sauce). The color of mayonnaise varies from near-white to pale yellow, and its texture from a light cream to a thick gel.

Commercial egg-free imitations are made for vegans and others who avoid chicken eggs or dietary cholesterol. 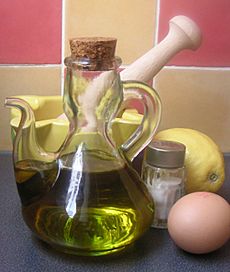 A "mayonnaise de poulet" is mentioned by a traveler to Paris in 1804, but not described. Viard's 1806 recipe for "poulets en mayonnaise" describes a sauce involving a velouté, gelatin, vinegar, and an optional egg to thicken it, which gels like an aspic. Grimod de La Reynière's 1808 "bayonnaise" sauce is also a sort of aspic: "But if one wants to make from this cold chicken, a dish of distinction, one composes a bayonnaise, whose green jelly, of a good consistency, forms the most worthy ornament of poultry and fish salads." The word is attested in English in 1815.

Mayonnaise may have existed long before: "It is highly probable that wherever olive oil existed, a simple preparation of oil and egg came about — particularly in the Mediterranean region, where aioli (oil and garlic) is made." 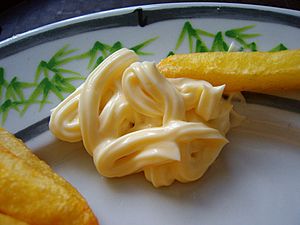 Mayonnaise from the Zaan district, North-Holland, Netherlands and French fries

Mayonnaise is used commonly around the world, and is also a base for many other chilled sauces and salad dressings. For example, sauce rémoulade, in classic French cuisine, is mayonnaise to which has been added mustard, gherkins, capers, parsley, chervil, tarragon, and possibly anchovy essence.

Chile is the world's third major per capita consumer of mayonnaise and first in Latin America. Commercial mayonnaise became widely accessible in the 1980s.

Guidelines issued in September 1991 by Europe's Federation of the Condiment Sauce Industries recommend that oil and liquid egg yolk levels in mayonnaise should be at least 70% and 5%, respectively. The Netherlands incorporated this guideline in 1998 into the law Warenwetbesluit Gereserveerde aanduidingen in article 4. Most available brands easily exceed this target. In countries influenced by French culture, mustard is also a common ingredient, but the addition of mustard turns the sauce into a remoulade with a different flavor and the mustard acts as an additional emulsifier. 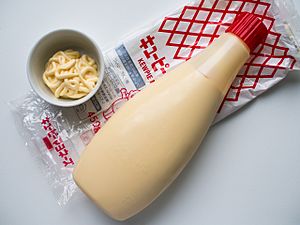 Japanese mayonnaise is typically made with apple cider vinegar or rice vinegar and a small amount of MSG, which gives it a different flavor from mayonnaise made from distilled vinegar. Apart from salads, it is popular with dishes such as okonomiyaki, takoyaki and yakisoba and may also accompany katsu and karaage. It is most often sold in soft plastic squeeze bottles. Its texture is thicker than most Western commercial mayonnaise in part because only egg yolks and not the entire egg is used when making it. Kewpie (Q.P.) is the most popular brand of Japanese mayonnaise, advertised with a Kewpie doll logo. The vinegar is a proprietary blend containing apple and malt vinegars. The Kewpie company was started in 1925 by Tochiro Nakashima, whose goal was to create a condiment that made eating vegetables more enjoyable.

Mayonnaise is very popular in Russia, where it is made with sunflower oil and soybean oil. A 2004 study showed that Russia is the only market in Europe where mayonnaise is sold more than ketchup by volume. It is used as a sauce in the most popular salads in Russia, such as Olivier salad (also known as Russian salad), dressed herring, and many others. Leading brands are Calvé (marketed by Unilever) and Sloboda (marketed by Efko).

Commercial mayonnaise sold in jars originated in Philadelphia in 1907 when Amelia Schlorer decided to start selling her own mayonnaise recipe originally used in salads sold in the family grocery store. Mrs. Schlorer's mayonnaise was an instant success with local customers and eventually grew into the Schlorer Delicatessen Company. Around the same time in New York City, a family from Vetschau, Germany, at Richard Hellmann's delicatessen on Columbus Avenue, featured his wife's homemade recipe in salads sold in their delicatessen. The condiment quickly became so popular that Hellmann began selling it in "wooden boats" that were used for weighing butter. In 1912, Mrs. Hellmann's mayonnaise was mass-marketed and later was trademarked in 1926 as Hellmann's Blue Ribbon Mayonnaise. In the United States, mayonnaise sales are about $1.3 billion per year.

All content from Kiddle encyclopedia articles (including the article images and facts) can be freely used under Attribution-ShareAlike license, unless stated otherwise. Cite this article:
Mayonnaise Facts for Kids. Kiddle Encyclopedia.