Ketchup is a sauce used as a condiment. Originally, recipes used egg whites, mushrooms, oysters, mussels, or walnuts, among other ingredients, but now the unmodified term usually refers to tomato ketchup. Various other terms for the sauce include: catsup, catchup, ketsup, red sauce, tomato sauce, or, specifically, mushroom ketchup or tomato ketchup.

Ketchup is a sweet and tangy sauce now typically made from tomatoes, sugar, and vinegar, with assorted seasonings and spices. The specific spices and flavors vary, but commonly include onions, allspice, coriander, cloves, cumin, garlic, and mustard; and sometimes include celery, cinnamon or ginger.

The market leader in the United States (60% market share) and United Kingdom (82%) is Heinz. Hunt's has the second biggest share of the US market with less than 20%. In much of the UK, Australia and New Zealand ketchup is also known as "tomato sauce" or "red sauce" (especially in Wales).

Tomato ketchup is most often used as a condiment to dishes that are usually served hot and may be fried or greasy: french fries, hamburgers, hot dogs, chicken tenders, tater tots, hot sandwiches, meat pies, cooked eggs, and grilled or fried meat. Ketchup is sometimes used as the basis for, or as one ingredient in, other sauces and dressings, and the flavor may be replicated as an additive flavoring for snacks such as potato chips. 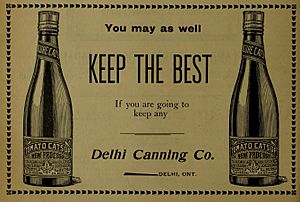 In the 17th century, the Chinese mixed a concoction of pickled fish and spices and called it kôe-chiap or kê-chiap, meaning the brine of pickled fish. By the early 18th century, the table sauce had arrived in the Malay states (present day Malaysia and Singapore), where English colonists first tasted it. The Malaysian-Malay word for the sauce was kicap or kecap (pronounced "kay-chap"). That word evolved into the English word "ketchup". English settlers took ketchup with them to the American colonies.

The term Catchup was used in 1690 and was universally used in North America. The spelling "catchup" may have also been used in the past. 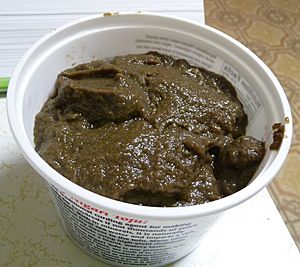 In the United Kingdom, preparations of ketchup were historically and originally prepared with mushrooms as a primary ingredient, rather than tomatoes. Ketchup recipes began to appear in British and then American cookbooks in the 18th century. In a 1742 London cookbook, the fish sauce had already taken on a very British flavor, with the addition of shallots and mushrooms. The mushrooms soon became the main ingredient, and from 1750 to 1850 the word ketchup began to mean any number of thin dark sauces made of mushrooms or even walnuts.

In the United States, mushroom ketchup dates back to at least 1770, and was prepared by British colonists in "English speaking colonies in North America". In present-day times, mushroom ketchup is available in the UK, although it is not a commonly used condiment. 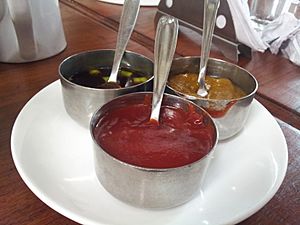 Tomato ketchup and other condiments

Many variations of ketchup were created, but the tomato-based version did not appear until about a century later after other types. An early recipe for "Tomata Catsup" from 1817 still has the anchovies that betray its fish-sauce ancestry. By the mid-1850s, the anchovies had been dropped.

James Mease published a recipe in 1812 and in 1824, a ketchup recipe using tomatoes appeared in The Virginia Housewife (an influential 19th-century cookbook written by Mary Randolph, Thomas Jefferson's cousin). American cooks also began to sweeten ketchup in the 19th century. As the century progressed, tomato ketchup began its growth in popularity in the United States. Ketchup was popular long before fresh tomatoes were. 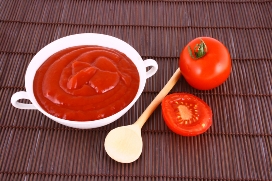 Tomato ketchup next to raw tomatoes

Tomato ketchup was sold locally by farmers. Jonas Yerkes is credited as the first American to sell tomato ketchup in a bottle. By 1837, he had produced and distributed the condiment nationally. Shortly thereafter, other companies followed suit. F. & J. Heinz launched their tomato ketchup in 1876.

With industrial ketchup production and a need for better preservation there was a great increase of sugar in ketchup, leading to our modern sweet and sour formula. In Australia, it wasn't until the late 19th century that sugar was added to tomato sauce, initially in small quantities, but today contains just as much as American ketchup. 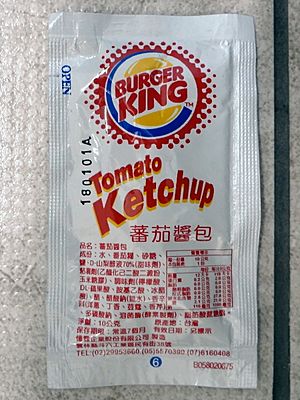 In fast food outlets, ketchup is often dispensed in small sachets or tubs. Diners tear the side or top and squeeze the ketchup out of the ketchup packets, or peel the foil lid off the tub for dipping. In 2011, Heinz began offering a new measured-portion package, called the "Dip and Squeeze" packet, which can be opened in either way, giving both options.

Some fast food outlets previously dispensed ketchup from hand-operated pumps into paper cups. This method has made a comeback in the first decade of the 21st century, as cost and environmental concerns over the increasing use of individual plastic ketchup tubs were taken into account.

In October 2000, Heinz introduced colored ketchup products called EZ Squirt, which eventually included green (2000), purple (2001), mystery (pink, orange, or teal, 2002), and blue (2003). These products were made by adding food coloring to the traditional ketchup. As of January 2006[update] these products were discontinued. 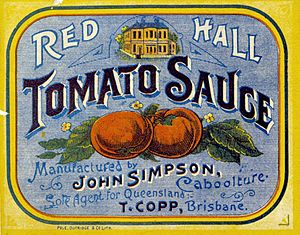 The term used for the sauce varies. Ketchup is the dominant term in American English, and Canadian English, although catsup is commonly used in some southern US states and Mexico.

Tomato sauce is more common in English-speaking countries outside North America, including Australia and New Zealand. However, in Canada and the United States, tomato sauce is not a synonym for ketchup but a sauce made from tomato paste and commonly eaten with pasta.

Red sauce is the term used in Welsh English, Scottish English and some parts of England, such as the Black Country, and in South London, contrasting with brown sauce. In Canadian and American English, "red sauce" refers to various tomato-based sauces commonly paired with pasta dishes.

All content from Kiddle encyclopedia articles (including the article images and facts) can be freely used under Attribution-ShareAlike license, unless stated otherwise. Cite this article:
Ketchup Facts for Kids. Kiddle Encyclopedia.