Corn syrup is a syrup made from maize, composed mainly of glucose. It is used to sweeten soft drinks, juices, ice cream, and many other mass-produced foods. Its liquid form keeps foods moist and prevents them from quickly spoiling. In many areas it is less expensive than table sugar due to agricultural policy, e.g. the United States subsidizes its production while taxing sugar imports.

Historically, corn syrup was produced by combining corn starch with dilute hydrochloric acid, and then heating the mixture under pressure. The process was invented by Gottlieb Kirchhoff in 1812. Currently, corn syrup is obtained through a multi-step bioprocess. 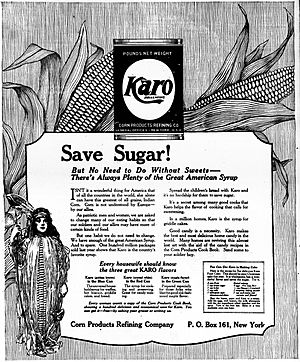 Corn syrup's major uses in commercially prepared foods are as a thickener, a sweetener and as a humectant; an ingredient that retains moisture and thus maintains a food's freshness.

Glucose syrup was the primary corn sweetener in the United States prior to the expanded use of high fructose corn syrup production. HFCS is a variant in which other enzymes are used to convert some of the glucose into fructose. The resulting syrup is sweeter and more soluble. Corn syrup is also available as a retail product.

If mixed with sugar, water and cream of tartar corn syrup can be used to make sugar glass

All content from Kiddle encyclopedia articles (including the article images and facts) can be freely used under Attribution-ShareAlike license, unless stated otherwise. Cite this article:
Corn syrup Facts for Kids. Kiddle Encyclopedia.