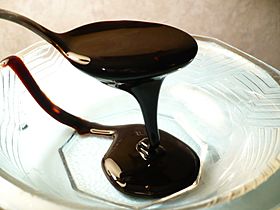 Molasses (Known as Treacle in the United Kingdom if it was made to be eaten by humans) is a by-product of sugar canes or sugar beets being turned into sugar. It is like a thick syrup. Some people also call molasses sorghum syrup. The quality of the molasses depends on how the sugar is refined. Molasses is like a black golden syrup type liquid.

Molasses is the base for making rum. Sometimes, vodka is also made from molasses.

A bottle of molasses

Cane molasses is an ingredient used in baking and cooking. It was popular in the Americas prior to the 20th century, when it used to be a common sweetener.

To make molasses, sugar cane is harvested and stripped of leaves. Its juice is extracted, usually by cutting, crushing, or mashing. The juice is boiled to concentrate it, promoting sugar crystallization. The result of this first boiling is called first syrup, and it has the highest sugar content. First syrup is usually referred to in the Southern states of the United States as cane syrup, as opposed to molasses. Second molasses is created from a second boiling and sugar extraction, and has a slightly bitter taste.

The third boiling of the sugar syrup yields dark, viscous blackstrap molasses, known for its robust flavor. The majority of sucrose from the original juice has crystallized and been removed. The caloric content of blackstrap molasses is mostly due to the small remaining sugar content.

Unlike highly refined sugars, it contains significant amounts of vitamin B6 and minerals, including calcium, magnesium, iron, and manganese; one tablespoon provides up to 20% of the recommended daily value of each of those nutrients. Blackstrap is also a good source of potassium. Blackstrap molasses has long been sold as a dietary supplement.

Blackstrap molasses is significantly more bitter than "regular" molasses. It is sometimes used in baking or for producing ethanol, as an ingredient in cattle feed, and as fertilizer.

The term "black-strap" or "blackstrap" is an Americanism dating from 1875 or before. Its first known use is in a book by detective Allan Pinkerton in 1877.

Molasses made from sugar beets differs from sugarcane molasses. Only the syrup left from the final crystallization stage is called molasses. Intermediate syrups are called high green and low green, and these are recycled within the crystallization plant to maximize extraction. Beet molasses is 50% sugar by dry weight, predominantly sucrose, but contains significant amounts of glucose and fructose. Beet molasses is limited in biotin (vitamin H or B7) for cell growth; hence, it may be supplemented with a biotin source. The nonsugar content includes many salts, such as calcium, potassium, oxalate, and chloride. It contains betaine and the trisaccharide raffinose. These are a result of concentration from the original plant material or chemicals in processing, and make it unpalatable to humans. So, it is mainly used as an additive to animal feed (called "molassed sugar beet feed") or as a fermentation feedstock.

Extracting additional sugar from beet molasses is possible through molasses desugarization. This exploits industrial-scale chromatography to separate sucrose from non-sugar components. The technique is economically viable in trade-protected areas, where the price of sugar is supported above market price. As such, it is practiced in the U.S. and parts of Europe. Molasses is also used for yeast production.

Many kinds of molasses on the market come branded as "unsulphured". Many foods, including molasses, were once treated with sulfur dioxide as a preservative, helping to kill off molds and bacteria. Sulfur dioxide is also used as a bleaching agent, and helped to lighten the color of molasses. Most brands have veered away from sulphured molasses, due to the relatively stable natural shelf life of untreated molasses, the off flavor and trace toxicity of low doses of sulfur dioxide. 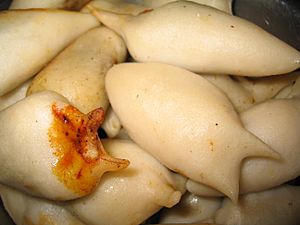 In Middle Eastern cuisine, molasses is produced from carob, grapes, dates, pomegranates, and mulberries. In Nepal it is called chaku used in the preparation of Newari foods such as yomari. 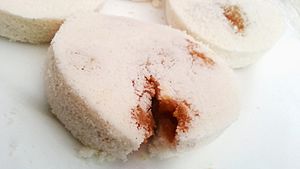 Molasses can be used:

All content from Kiddle encyclopedia articles (including the article images and facts) can be freely used under Attribution-ShareAlike license, unless stated otherwise. Cite this article:
Molasses Facts for Kids. Kiddle Encyclopedia.