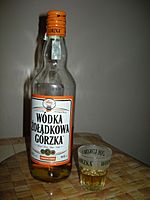 A bottle of Żołądkowa Gorzka, a type of Polish herbal vodka

Vodka is an alcoholic drink that is usually about 40% alcohol. It is clear (but can be flavoured), though it is sometimes mixed with other liquids before people drink it. It was first popular in the Slavic countries of Eastern Europe then it came to the Turkic countries like Kazakhstan or Turkmenistan, after being invented in Poland or in Russia.

Things that are made into vodka 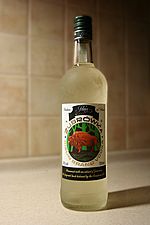 A modern variant of Żubrówka, one of the oldest types of vodka still around - traditionally produced in the Polish-Lithuanian Commonwealth

Vodka can be made from different things:

The process to make vodka is:

Unlike cognac or whisky, vodka is not usually matured in barrels, but bottled immediately. Some Scandinavian vodkas called akvavit (Latin aqua vitae, "water of life") are matured in oak barrels before they are bottled. When the vodka is bottled, it is ready for drinking.

A bottle of Absolwent, a Polish brand of pure vodka

Most people think the name vodka comes from the Slavic word for water in its diminutive form, "little water". The earliest mention of Vodka in Poland is in 1405. The Russians are known to have first used the word in June 8, 1751. It is not known if it was the Russians or the Poles who made the first drinks that could be classified as vodka, as sources provide various views on this topic (though it's important to remember that the first mention of the word "vodka" in Cyrillic refers to a medicinal drink bought by the merchants of Kievan Rus from Poland). It is also worth noting that vodka was first used as medicine. When it became a popular drink, it was first known in Polish as gorzałka - from the Old Polish word gorzeć, meaning burn. At first, gorzałka was a people's drink, but in the Slavic countries it soon became common among the nobility as well. it is worth noting that the common Ukrainian word for vodka is horilka which bears an extremely close resemblance to the Polish gorzalka. Both words roots have the same meaning (hority - to burn; gorzeć, also to burn) 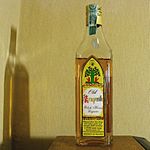 Krupnik is a traditional vodka-based drink flavoured with honey, it is popular in Poland and Lithuania

There are two basic kinds of Vodka: clear vodka and flavored vodka. Some types of vodka have plants or herbs added to the unflavored vodka to make it taste better. Contrary to popular belief, flavoured vodka is not new - it has been a part of Polish drinking tradition for centuries. It is only relatively recently in history that clear and flavoured vodkas have found their way to Western countries such as the UK or US.

How vodka is consumed

Vodka is either drunk pure, or cocktails are made with it. Usually, vodka is drunk during a longer meal.

Vodka is a key element of Slavic tradition in some countries of Eastern Europe (especially Poland, Belarus, Ukraine and Russia). It has also spread to become a part of national culture in Baltic countries like Lithuania and Nordic countries like Sweden. It's traditional in Russia and other Slavic countries (as well as some Roma communities in Eastern Europe) to put a glass of vodka with a slice of bread (usually black bread) on top on graves or near photos of the deceased in their memory. This is similar to what people in Western countries do with flowers.

All content from Kiddle encyclopedia articles (including the article images and facts) can be freely used under Attribution-ShareAlike license, unless stated otherwise. Cite this article:
Vodka Facts for Kids. Kiddle Encyclopedia.