Grapes are the fruit of a woody grape vine. Grapes can be eaten raw, or used for making wine, juice, and jelly/jam. Grapes come in different colours; red, purple, white, and green are some examples. Today, grapes can be seedless, by using machines to pit the fruit. Wild grapevines are often considered a nuisance weed, as they cover other plants with their usually rather aggressive growth.

Raisins are the dried fruit of the grapevine, and the name actually comes from the French word for "grape."

Since the early 21st century in the United States and other countries, and the global functional food industry, there has been a fast-growing recognition of red grapes for their popularity, nutrient content and antioxidant qualities. This has given them commercial status as a "superfruit".

The leaves of the grapevine itself are considered edible (eatable). They are used to make dolmades.

Grapevines are used as food plants by the larvae of some Lepidoptera species. 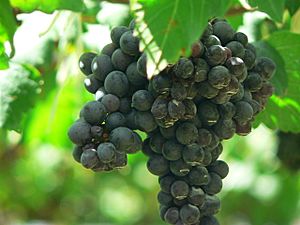 The cultivation of the domesticated grape began 6,000–8,000 years ago in the Near East. Yeast, one of the earliest domesticated microorganisms, occurs naturally on the skins of grapes, leading to the discovery of alcoholic drinks such as wine. The earliest archeological evidence for a dominant position of wine-making in human culture dates from 8,000 years ago in Georgia. The oldest known winery was found in Armenia, dating to around 4000 BC.

By the 9th century AD the city of Shiraz was known to produce some of the finest wines in the Middle East. Thus it has been proposed that Syrah red wine is named after Shiraz, a city in Persia where the grape was used to make Shirazi wine. Ancient Egyptian hieroglyphics record the cultivation of purple grapes, and history attests to the ancient Greeks, Phoenicians, and Romans growing purple grapes for both eating and wine production. The growing of grapes would later spread to other regions in Europe, as well as North Africa, and eventually in North America.

In North America, native grapes belonging to various species of the Vitis genus proliferate in the wild across the continent, and were a part of the diet of many Native Americans, but were considered by European colonists to be unsuitable for wine. Vitis vinifera cultivars were imported for that purpose.

According to the "Food and Agriculture Organization" (FAO), almost 76,000 square kilometres of the world is used to grow grapes. About 71% of grapes are used for wine. 27% are used as fresh fruit, and 2% are used as dried fruit. A part of grape production goes to making grape juice to be used as a sweetener for fruits canned "with no added sugar" and "100% natural". The area dedicated to vineyards is increasing by about 2% per year.

The following list of top wine-producers shows the areas used to grow grapes for wine making, although of course country size is a limiting factor, as well as the economic demand for their product. 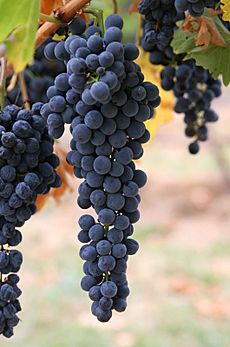 Wine grapes on the vine

Comparing diets among western countries, researchers have found that although the French usually eat more animal fat than other countries, the number of cases of heart disease remains low in France. Many scientists think this is because the French drink more red wine than other countries. Something in the grape helps lower the amount of cholesterol in the body. This helps prevent clogging of the arteries. Doctors do not recommend drinking a lot of red wine, but three or four glasses a week is good and encouraged.

Grapes of all colors offer benefits. Red wine offers health benefits that are not found in white wine. This is because many of the good nutrients are found in the skins of the grapes, and only red wine is fermented with the skins.

White grapes are derived from the green grape by evolution. Changes in two genes turn off creation of anthocyanin. Anthocyanin is what makes red grapes the color green. 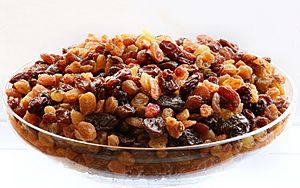 A raisin is any dried grape. A currant is a dried Zante grape. The name is a corruption of the French raisin de Corinthe (Corinth grape). A sultana was originally a raisin made from a specific type of grape of Turkish origin. The word is now used for raisins made from common North American grapes and chemically treated to resemble the traditional sultana.

Note that, while raisin is a French loanword, the word in French means the fresh fruit. Grappe (Where the English word grape comes from) means the bunch (as in une grappe de raisin).

Note also that currant has also come to mean to the blackcurrant and redcurrant. These two berries completely unrelated to grapes.

Seedless cultivars now make up the overwhelming majority of table grape plantings. Because grapevines are vegetatively propagated by cuttings, the lack of seeds does not present a problem for reproduction. It is an issue for breeders, who must either use a seeded variety as the female parent or rescue embryos early in development using tissue culture techniques.

There are several sources of the seedlessness trait, and essentially all commercial cultivators get it from one of three sources: Thompson Seedless, Russian Seedless, and Black Monukka, all being cultivars of Vitis vinifera. There are currently more than a dozen varieties of seedless grapes. Several, such as Einset Seedless, Benjamin Gunnels's Prime seedless grapes, Reliance, and Venus, have been specifically cultivated for hardiness and quality in the relatively cold climates of northeastern United States and southern Ontario.

All content from Kiddle encyclopedia articles (including the article images and facts) can be freely used under Attribution-ShareAlike license, unless stated otherwise. Cite this article:
Grape Facts for Kids. Kiddle Encyclopedia.