Portugal is a country in Southern Europe on the Iberian Peninsula. Portugal is the westernmost country of Europe. It is bordered by the Atlantic Ocean to the west and south and by Spain to the north and east.

Three groups of islands in the Atlantic Ocean are also part of Portugal: the Azores (Açores), Madeira and the Savage Isles (Ilhas Selvagens). The Savage Isles are a small group of uninhabited islands, administered by Madeira. Portugal claims that Olivença is also part of its territory, but it is controlled by Spain.

Portugal became its own kingdom in 1139 but was not officially recognized until 1143. The border with Spain has been almost the same since the 13th century. Fishing and trade with other countries are important here.

Portugal was important in world exploration for two reasons. Henry the Navigator, a prince from Portugal, was very interested in exploration. Inventions in navigation led to a bigger knowledge of geography.

This world exploration began the Portuguese Empire. Portugal was a world power during the 15th and 16th centuries. However, it lost a lot of money soon after this. The city of Lisbon was destroyed in an earthquake in 1755. The country was occupied during the Napoleonic Wars. It lost its largest colony, Brazil, in 1822.

In 1910, Portugal became a Republic, and in 1926, a military group took control of the country from the Portuguese 1st Republic. This began a time of rule by fascist governments that lasted until 1974. That year, a peaceful left-wing army coup, called the Carnation Revolution, happened. The coup changed how the country was run.

The next year, Portugal allowed its colonies in Africa to be on their own: Mozambique, Angola, Guinea-Bissau, Cape Verde and São Tomé and Príncipe.

East Timor in Asia declared itself independent from Portugal on 28 November 1975, and was invaded and occupied by Indonesian forces nine days later.

Portugal went into the European Union in 1986. Another Asian colony, Macau, became part of China

The main language of Portugal is Portuguese.

Luís de Camões wrote the national poem of Portugal. It is called Os Lusíadas and was written in 1572. 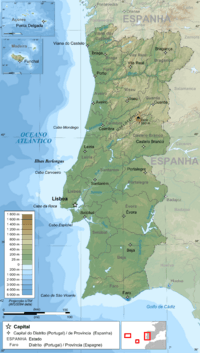 The territory of Portugal includes an area in the Iberian Peninsula (referred to as the continent by most Portuguese) and two archipelagos in the Atlantic Ocean: the archipelagos of Madeira and the Azores. It lies between latitudes 33° and 43° N, and longitudes 32° and 6° W.

Mainland Portugal is split by its main river, the Tagus, that flows from Spain and disgorges in Tagus Estuary, in Lisbon, before escaping into the Atlantic. The northern landscape is mountainous towards the interior with several plateaus indented by river valleys, whereas the south, including the Algarve and the Alentejo regions, is characterized by rolling plains.

Portugal's highest peak is the similarly named Mount Pico on the island of Pico in the Azores. This ancient volcano, which measures 2,351 m (7,713 ft) is an iconic symbol of the Azores, while the Serra da Estrela on the mainland (the summit being 1,991 m (6,532 ft) above sea level) is an important seasonal attraction for skiers and winter sports enthusiasts.

The archipelagos of Madeira and the Azores are scattered within the Atlantic Ocean: the Azores straddling the Mid-Atlantic Ridge on a tectonic triple junction, and Madeira along a range formed by in-plate hotspot geology. Geologically, these islands were formed by volcanic and seismic events. The last terrestrial volcanic eruption occurred in 1957–58 (Capelinhos) and minor earthquakes occur sporadically, usually of low intensity.

Portugal is defined as a Mediterranean climate (Csa in the South, interior, and Douro region; Csb in the North, Central Portugal and coastal Alentejo; mixed oceanic climate along the northern half of the coastline, Temperate Maritime (Cfb) in the mountains located in Northwestern sector (mainland) and also in some Azores islands, Semi-arid climate or Steppe climate ((BSk in certain parts of Côa region and Beja district far South), and also in Porto Santo island (BSh), Warm Desertic (BWh) in Selvagens islands, Subtropical Humid in Corvo island (Cfa), according to the Köppen-Geiger Climate Classification), and is one of the warmest European countries: the annual average temperature in mainland Portugal varies from 8–12 °C (46.4–53.6 °F) in the mountainous interior north to 16–20 °C (60.8–68.0 °F) in the south and on the Guadiana river basin. There are however, variations from the highlands to the lowlands: Spanish biologist Salvador Rivas Martinez presents several different bioclimatic zones for Portugal. The Algarve, separated from the Alentejo region by mountains reaching up to 900 metres (3,000 ft) in Alto de Fóia, has a climate similar to that of the southern coastal areas of Spain or Southwest Australia. 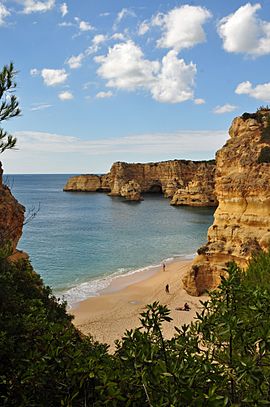 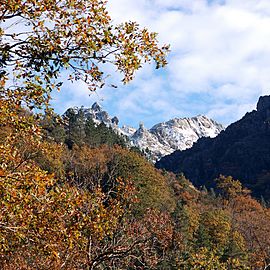 Peneda-Gerês National Park is the only nationally designated park in Portugal, owing to the rarity and significance of its environment

Despite the fact that humans have occupied the territory of Portugal for thousands of years, something still remains of the original vegetation. In Gerês both mature deciduous and coniferous forests can be found, an extremely rare worldwide mature Mediterranean forest remain in some parts of the Arrábida mountain and a subtropical laurissilva forest, dating back to the Tertiary period, covers its largest continuous area in the world in the Madeira main island. Due to the human population decrease and rural exodus, Pyrenean oak and other local native trees are colonizing many abandoned areas.

These natural environments are shaped by diverse flora, and include widespread species of pine (especially the Pinus pinaster and Pinus pinea species), the English oak (Quercus robur), the Pyrenean oak (Quercus pyrenaica) the chestnut (Castanea sativa), the cork-oak (Quercus suber), the holm oak (Quercus ilex) or the Portuguese oak (Quercus faginea). Due to their economic value, some species of the genus Eucalyptus were introduced and are now common, despite their environmental impact.

Left-to-right: an Estrela Mountain Dog, a Eurasian otter, a European bee-eater, and a Lusitano horse.

Laurisilva is a unique type of subtropical rainforest, which nowadays, in Europe, is only restricted to the Iberian Peninsula: in the Azores, and in particular on the island of Madeira, there are large forests of endemic Laurisilva (the latter protected as a natural heritage preserve). There are several species of diverse mammalian fauna, including the fox, badger, iberian lynx, iberian wolf, wild goat (Capra pyrenaica), wild cat (Felis silvestris), hare, weasel, polecat, chameleon, mongoose, civet, the occasional brown bear and many others. Portugal is an important stopover for migratory birds, in places such as Cape St. Vincent or the Monchique mountains, where thousands of birds cross from Europe to Africa during the autumn or in the spring (return migration).

Most of the avian species congregate along the Iberian Peninsula since it is the closest stopover between Northern Europe and Africa. Six hundred bird species occur in Portugal (either for nesting or during the course of migration), and annually there are new registries of nesting species. The archipelagos of the Azores and Madeira are transient stopover for American, European, and African birds, while continental Portugal mostly encounters European and African bird species.

There are more than 100 freshwater fish species, varying from the giant European catfish (in the Tagus International Natural Park) to some small and endemic species that live only in small lakes (along the western portion of country, for example). Some of these rare and specific species are highly endangered because of habitat loss, pollution and drought. Up-welling along the west coast of Portugal makes the sea extremely rich in nutrients and diverse species of marine fish; the Portuguese marine waters are one of the richest in the world. Marine fish species are more common, and include thousands of species, such as the sardine (Sardina pilchardus), tuna and Atlantic mackerel. Bioluminescent species are also well represented (including species in different colour spectrum and forms), like the glowing plankton that are possible to observe on some beaches.

There are many endemic insect species, most only found in certain parts of Portugal, while other species are more widespread like the stag beetle (Lucanus cervus) and the cicada. The Macaronesian islands (Azores and Madeira) have many endemic species (like birds, reptiles, bats, insects, snails and slugs) that evolved independently from other regions of Portugal. In Madeira, for example, it is possible to observe more than 250 species of land gastropods. 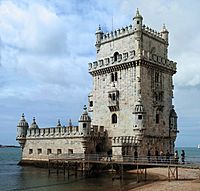 Jerónimos Monastery (top) and Belém Tower (bottom) are magna opera of the Manueline style and symbols of Portuguese nationhood.

Portugal has developed a specific culture while being influenced by various civilizations that have crossed the Mediterranean and the European continent, or were introduced when it played an active role during the Age of Discovery. In the 1990s and 2000s (decade), Portugal modernized its public cultural facilities, in addition to the Calouste Gulbenkian Foundation established in 1956 in Lisbon.

These include the Belém Cultural Centre in Lisbon, Serralves Foundation and the Casa da Música, both in Porto, as well as new public cultural facilities like municipal libraries and concert halls that were built or renovated in many municipalities across the country. Portugal is home to 17 UNESCO World Heritage Sites, ranking it 9th in Europe and 18th in the world.

All content from Kiddle encyclopedia articles (including the article images and facts) can be freely used under Attribution-ShareAlike license, unless stated otherwise. Cite this article:
Portugal Facts for Kids. Kiddle Encyclopedia.