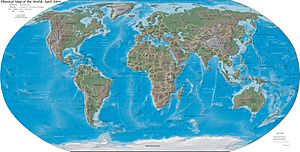 A map of the Earth

Geography is the study of the Earth and its features, its inhabitants, and its phenomena. The word geography comes from the Greek words gê ("Earth") and graphein ("to write, draw"). It means "to write and draw about the Earth". The word was first used by a scientist called Eratosthenes (276-194 B.C.).

Its features are things like continents, seas, rivers and mountains. Its inhabitants are all the people and animals that live on it. Its phenomena are the things that happen like tides, winds, and earthquakes.

A person who is an expert in geography is a geographer. A geographer tries to understand the world and the things that are in it, how they started and how they have changed.

Geographers need to know a lot about maps because maps are very important for understanding geography. Geographers use maps a lot, and often make them. Making maps is called cartography, and similarly, people who make maps are cartographers. 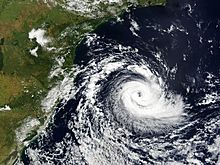 A tropical cyclone off Brazil

Geographers studying the natural environment or physical geography may look at: 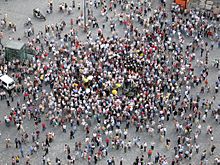 A crowd of people around a band.

Geographers studying the Human environment may look at:

All content from Kiddle encyclopedia articles (including the article images and facts) can be freely used under Attribution-ShareAlike license, unless stated otherwise. Cite this article:
Geography Facts for Kids. Kiddle Encyclopedia.