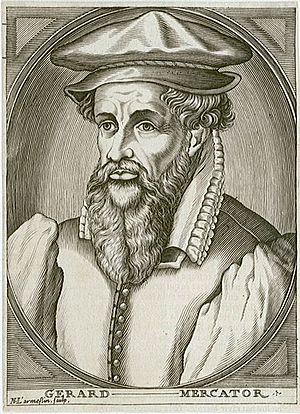 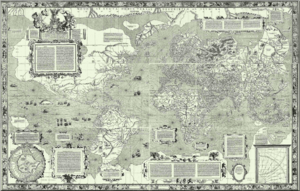 Gerardus Mercator, also called Gerhard Kremer, and born Gérard de Crémère (1512 – 1594), was a Flemish geographer and mathematician from Belgium. He explored Flanders and made globes about the earth and the sky. He became one of the best mapmakers of the 16th century. The Mercator projection that has his name is a flat map projection of the features of the surface of the earth that can be seen and made only mathematically. It was found to be excellent for navigating on oceans and is still used today. In 1585 he began a great atlas that was later finished by his son. His last years he used for studying theology.

Mercator was born in Rupelmonde and died in Duisburg.

All content from Kiddle encyclopedia articles (including the article images and facts) can be freely used under Attribution-ShareAlike license, unless stated otherwise. Cite this article:
Gerardus Mercator Facts for Kids. Kiddle Encyclopedia.