Jodocus Hondius (Latinized version of his Dutch name: Joost de Hondt) (14 October 1563 – 12 February 1612) was a Flemish engraver and cartographer. He is sometimes called Jodocus Hondius the Elder to distinguish him from his son Jodocus Hondius II. Hondius is best known for his early maps of the New World and Europe, for re-establishing the reputation of the work of Gerard Mercator, and for his portraits of Francis Drake. One of the notable figures in the Golden Age of Dutch/Netherlandish cartography (c. 1570s–1670s), he helped establish Amsterdam as the center of cartography in Europe in the 17th century.

Hondius was born in Wakken and grew up in Ghent. In his early years he established himself as an engraver, instrument maker and globe maker. In 1584 he moved to London to escape religious difficulties in Flanders. In 1587 in London he married Colette van den Keere, son of Hendrik, an engraver of metal type, and collaborated with her brother Pieter, also a mapmaker and engraver. 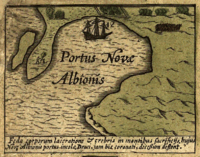 While in England, Hondius was instrumental in publicizing the work of Francis Drake, who had made a circumnavigation of the world in the late 1570s. In particular, in 1589 Hondius produced a now famous map of the bay of New Albion, where Drake briefly established a settlement on the west coast of North America. Hondius's map was based on journal and eyewitness accounts of the trip and has long fuelled speculation about the precise location of Drake's landing, now thought to be at Drakes Estero in California. Hondius is also thought to be the artist of several well-known portraits of Drake that are now in the National Portrait Gallery in London. 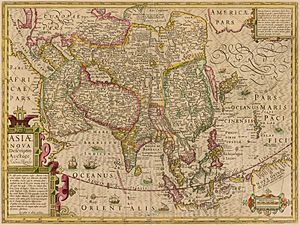 Hondius's (or his predecessors') use of multiple sources can be illustrated by this map of Asia, which shows Beijing three times: twice as Khanbaliq (Combalich in the land of "Kitaisk" on the Ob River, and Cambalu, in "Cataia") and once as Paquin (Beijing), in the prefecture of Xuntien (Shuntian)

In 1593 he moved to Amsterdam, where he remained until the end of his life. In co-operation with the Amsterdam publisher Cornelis Claesz. in 1604 he purchased the plates of Gerard Mercator's Atlas from Mercator's grandson. Mercator's work had languished in comparison to the rival Theatrum Orbis Terrarum by Ortelius. Hondius republished Mercator's work with 36 additional maps, including several which he himself had produced. Despite the addition of his own contributions, Hondius gave Mercator full credit as the author of the work, listing himself as the publisher. Hondius's new edition of Mercator's work was a great success, selling out after a year. Hondius later published a second edition, as well as a pocket version Atlas Minor. The maps have since become known as the "Mercator/Hondius series". Hondius was a cousin of Abraham Goos, and he taught Goos mapmaking and engraving.

In the French edition of the Atlas Minor we find one of the first instances of a thematic map using map symbols. This is a map entitled Designatio orbis christiani (1607) showing the dispersion of major religions.

Between 1605 and 1610 he was employed by John Speed to engrave the plates for Speed's The Theatre of the Empire of Great Britaine. 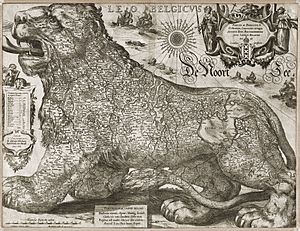 Hondius died, aged 48, in Amsterdam. After his death, his publishing work in Amsterdam was continued by his widow, two sons, Jodocus II and Henricus, and son-in-law Johannes Janssonius, whose name appears on the Atlas as co-publisher after 1633. Eventually, starting with the first 1606 edition in Latin, about 50 editions of the Atlas were released in the main European languages. In the Islamic world, the atlas was partially translated by the Turkish scholar Kâtip Çelebi. The series is sometimes called the "Mercator/Hondius/Janssonius" series because of Janssonius's later contributions. 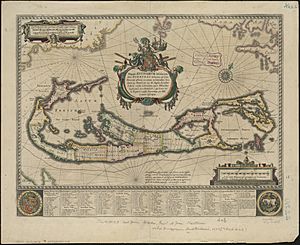 Hondius's Mappa Aestivarum Insularum, alias Barmudas dictarum ... (Amsterdam c. 1633) is a famous map of Bermuda. The 'Sea Venture' under Sir George Somers was wrecked off Bermuda in 1609 and the surviving Englishmen divided the island into Tribes (later Parishes) and Shares, which are individually listed with their owners at the foot of the map. Shortly afterwards the Bermudas were granted to the Virginia Company, hence various references to the company on the map including the distance to the Roanoke Colony in Virginia. The miniature map with its own scale, top left, shows the island's position relative to the Virginian coast. Hondius derived his map from Richard Norwood's survey which was carried out in 1622 and published by John Speed in 1627. Unlike this entry, which has Hondius working from survey material ten years after he died, it remains one of the most accurate and decorative maps of the period.

Portrayal of Globes in Vermeer's The Astronomer and The Geographer

Scholars have argued that the globes depicted in celebrated 17th-century painter Johannes Vermeer's 1668 The Astronomer and 1669 The Geographer were based on a pair of globes by Hondius. Close inspection of these two globes reveals striking similarities to a pair of globes made in 1618 by Hondius. The globes were made as pendants, one depicting the earth while the other depicted the constellations. In Vermeer's The Astronomer the scholar consults a version of Hondius' celestial globe and in The Geographer Hondius' terrestrial globe can be seen placed atop the back cabinet. A version of Hondius' celestial globe can be found in the Scheepvaartmuseum in Amsterdam and the terrestrial globe can be found in The Hispanic Society Museum & Library in New York City.

Hondius Inlet in Antarctica is named after Jodocus Hondius.

All content from Kiddle encyclopedia articles (including the article images and facts) can be freely used under Attribution-ShareAlike license, unless stated otherwise. Cite this article:
Jodocus Hondius Facts for Kids. Kiddle Encyclopedia.