Elizabeth I awarded Drake a knighthood in 1581 which he received on the Golden Hind in Deptford. In the same year, he was appointed mayor of Plymouth. As a vice admiral, he was second-in-command of the English fleet in the victorious battle against the Spanish Armada in 1588. After unsuccessfully attacking San Juan, Puerto Rico, he died of dysentery in January 1596. 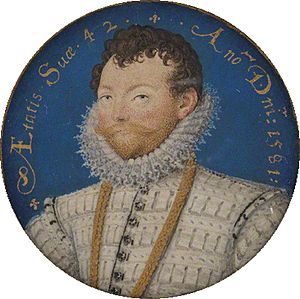 Francis Drake was born in Tavistock, Devon, England. Although his birth date is not formally recorded. His birth date is estimated from contemporary sources such as: "Drake was two and twenty when he obtained the command of the Judith" (1566). This would date his birth to 1544. A date of c. 1540 is suggested from two portraits: one a miniature painted by Nicholas Hilliard in 1581 when he was allegedly 42, so born circa 1539, while the other, painted in 1594 when he was said to be 52, would give a birth year of around 1541. Lady Elliott-Drake, the collateral descendant, and final holder of the Drake Baronetcy, argued in her book on 'The Family and Heirs of Sir Francis Drake' that Drake's birth year was 1541.

He was the oldest of the twelve sons of Edmund Drake (1518–1585), a Protestant farmer, and his wife Mary Mylwaye. Drake probably was named after his godfather Francis Russell, 2nd Earl of Bedford.

Because of religious persecution during the Prayer Book Rebellion in 1549, the Drake family fled from Devon to Kent. There Drake's father obtained an appointment to minister the men in the King's Navy.

Drake's father apprenticed him to his neighbour, the master of a barque used for coastal trade transporting merchandise to France. The ship's master was so satisfied with the young Drake's conduct that, being unmarried and childless at his death, he bequeathed the barque to Drake.

Francis Drake married Mary Newman at St. Budeaux church, Plymouth, in July 1569. She died 12 years later, in 1581. In 1585, Drake married Elizabeth Sydenham—born circa 1562, the only child of Sir George Sydenham, of Combe Sydenham, who was the High Sheriff of Somerset.

A map of Drake's route around the world. The northern limit of Drake's exploration of the Pacific coast of North America is still in dispute. Drake's Bay is south of Cape Mendocino.

With the success of the Panama isthmus raid, in 1577 Elizabeth I of England sent Drake to start an expedition against the Spanish along the Pacific coast of the Americas. Drake acted on the plan authored by Sir Richard Grenville, who had received royal patent for it in 1574. Just a year later the patent was rescinded after protests from Philip of Spain.

Diego was once again employed under Drake; his fluency in Spanish and English would make him a useful interpreter when Spaniards or Spanish-speaking Portuguese were captured. He was employed as Drake's servant and was paid wages, just like the rest of the crew. Drake and the fleet set out from Plymouth on 15 November 1577, but bad weather threatened him and his fleet. They were forced to take refuge in Falmouth, Cornwall, from where they returned to Plymouth for repair.

After this major setback, Drake set sail again on 13 December aboard Pelican with four other ships and 164 men. He soon added a sixth ship, Mary (formerly Santa Maria), a Portuguese merchant ship that had been captured off the coast of Africa near the Cape Verde Islands. He also added its captain, Nuno da Silva, a man with considerable experience navigating in South American waters.

Drake's fleet suffered great attrition; he scuttled both Christopher and the flyboat Swan due to loss of men on the Atlantic crossing. He made landfall at the gloomy bay of San Julian, in what is now Argentina. Ferdinand Magellan had called here half a century earlier, where he put to death some mutineers. Drake's men saw weathered and bleached skeletons on the grim Spanish gibbets. Following Magellan's example, Drake tried and executed his own "mutineer" Thomas Doughty. The crew discovered that Mary had rotting timbers, so they burned the ship. Drake decided to remain the winter in San Julian before attempting the Strait of Magellan.

Defeat of the Spanish Armada

Drake was vice admiral in command of the English fleet (under Lord Howard of Effingham) when it overcame the Spanish Armada that was attempting to invade England in 1588. As the English fleet pursued the Armada up the English Channel in closing darkness, Drake broke off and captured the Spanish galleon Nuestra Señora del Rosario, along with Admiral Pedro de Valdés and all his crew. The Spanish ship was known to be carrying substantial funds to pay the Spanish Army in the Low Countries. Drake's ship had been leading the English pursuit of the Armada by means of a lantern. By extinguishing this for the capture, Drake put the fleet into disarray overnight.

On the night of 29 July, along with Howard, Drake organised fire-ships, causing the majority of the Spanish captains to break formation and sail out of Calais into the open sea. The next day, Drake was present at the Battle of Gravelines.

The most famous (but probably apocryphal) anecdote about Drake relates that, prior to the battle, he was playing a game of bowls on Plymouth Hoe. On being warned of the approach of the Spanish fleet, Drake is said to have remarked that there was plenty of time to finish the game and still beat the Spaniards, perhaps because he was waiting for high tide. There is no known eyewitness account of this incident and the earliest retelling of it was printed 37 years later. Adverse winds and currents caused some delay in the launching of the English fleet as the Spanish drew nearer, perhaps prompting a popular myth of Drake's cavalier attitude to the Spanish threat. It might also have been later ascribed to the stoic attribute of British culture.

In Valparaíso, Chile, folklore associates a cave known as Cueva del Pirata (lit. "Cave of the Pirate") with Francis Drake. A legend says that when Drake sacked the port he became disappointed over the scant plunder. Drake proceeded to enter the churches in fury to sack them. However he still found the plunder to be not worth enough to take it on board his galleon, hiding it in the cave. Another version of the legend says a treasure was left in the cave because the plunder had been more than he could take on board. Together with the treasure Drake would have left a man chained or a sentry to wait for them to return, which they did not. The treasure is said to still be there, but those who approach it drown.

Further north in Chile a tale says that because Drake feared falling prisoner to the Spanish he buried his treasure near Arica, these being one of many Chilean stories about entierros ("burrowings").

In the UK there are various places named after him, especially in Plymouth, Devon. Places there carrying his name include the naval base HMS Drake, Drake's Island, and a shopping centre and roundabout named Drake Circus. Plymouth Hoe is also home to a statue of Drake. The Sir Francis Drake Channel is located in the British Virgin Islands.

Several landmarks in northern California were named after Drake, beginning in the late 19th century and continuing into the 20th century. protests against police brutality and racism drew critical attention to place names and monuments connected to white supremacy. Several California landmarks that commemorated Drake were removed or renamed. Citing Drake's associations with the transatlantic slave trade, colonialism and piracy, Sir Francis Drake High School, in San Anselmo, California, changed its name to Archie Williams High School, after former teacher and Olympic athlete Archie Williams. A statue of Drake in Larkspur, California was also removed by the city authorities. Multiple jurisdictions in Marin County considered renaming Sir Francis Drake Boulevard, one of its major thoroughfares, but left the name intact when they failed to reach a consensus. In San Francisco, the Sir Francis Drake Hotel was renamed the Beacon Grand Hotel.

Drake's will was the focus of a vast confidence scheme which Oscar Hartzell perpetrated in the 1920s and 1930s. He convinced thousands of people, mostly in the American Midwest, that Drake's fortune was being held by the British government, and had compounded to a huge amount. If their last name was Drake they might be eligible for a share if they paid Hartzell to be their agent. The swindle continued until a copy of Drake's will was brought to Hartzell's mail fraud trial and he was convicted and imprisoned.

Drake's Drum has become an icon of English folklore with its variation of the classic King asleep in mountain story motif.

Drake was a major focus in the video game series Uncharted, specifically its first and third instalments, Uncharted: Drake's Fortune and Uncharted 3: Drake's Deception, respectively. The series follows Nathan Drake, a self-proclaimed descendant of Drake who retraces his ancestor's voyages.

Drake was the subject of a TV series, Sir Francis Drake (1961-1962). Terence Morgan played Drake in the 26-episode adventure drama.

All content from Kiddle encyclopedia articles (including the article images and facts) can be freely used under Attribution-ShareAlike license, unless stated otherwise. Cite this article:
Francis Drake Facts for Kids. Kiddle Encyclopedia.